Visit Oxford and Its Prestigious University in England

Visit Oxford and Its Prestigious University in England

Oxford, England, is a beautiful place. Built around the many colleges of Oxford University, you can find pubs, architecture, and all kinds of history in this city. From Shakespeare’s old hangout at the King’s Arms to the pub literary masters like Tolkien and C.S. Lewis frequented, Oxford is full of things to do and see. Whether you’re taking a day trip from London or staying in Oxford proper, you’re in for a treat. In this post we share some ideas of what to do in Oxford through pictures. Enjoy!

Pro tip: If you’re visiting Oxford why not also see Stonehenge? You’re only a couple hours’ drive away. Skip the tour bus and expensive entry and rent a car on your own. You can read more about it in our post on how to see Stonehenge for free! 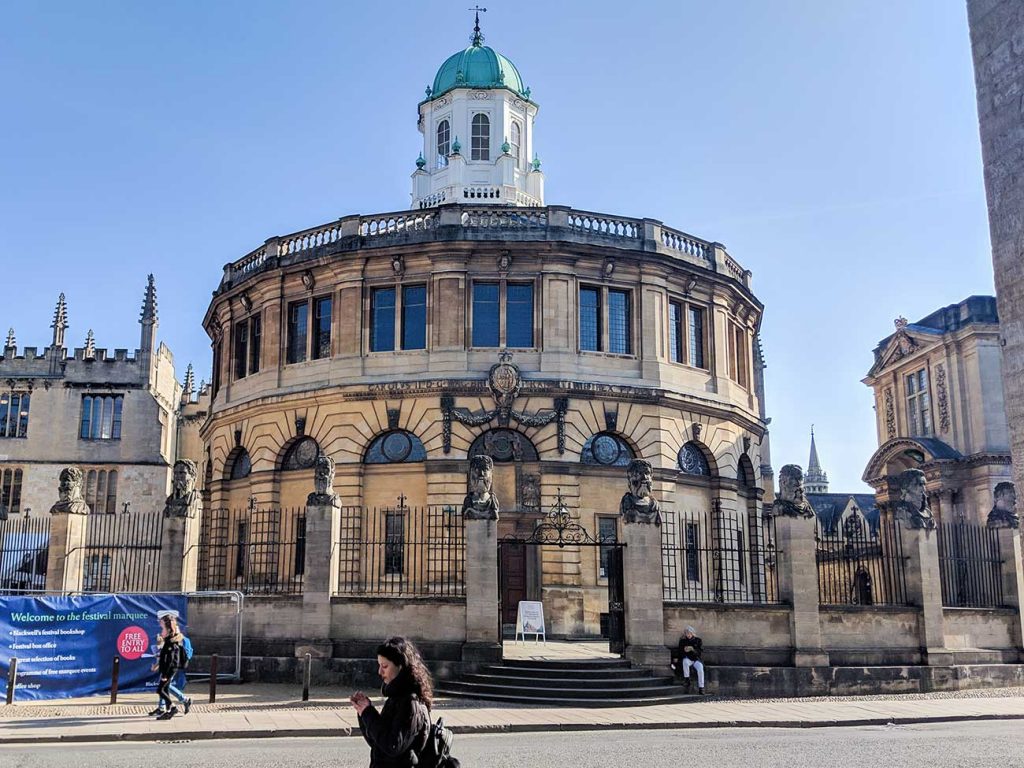 The Sheldonian Theater in Oxford was built to resemble the Coliseum in Rome. Obviously, it is not as large as what’s standing in Rome but it is very symbolic of the Roman impact on civilization. 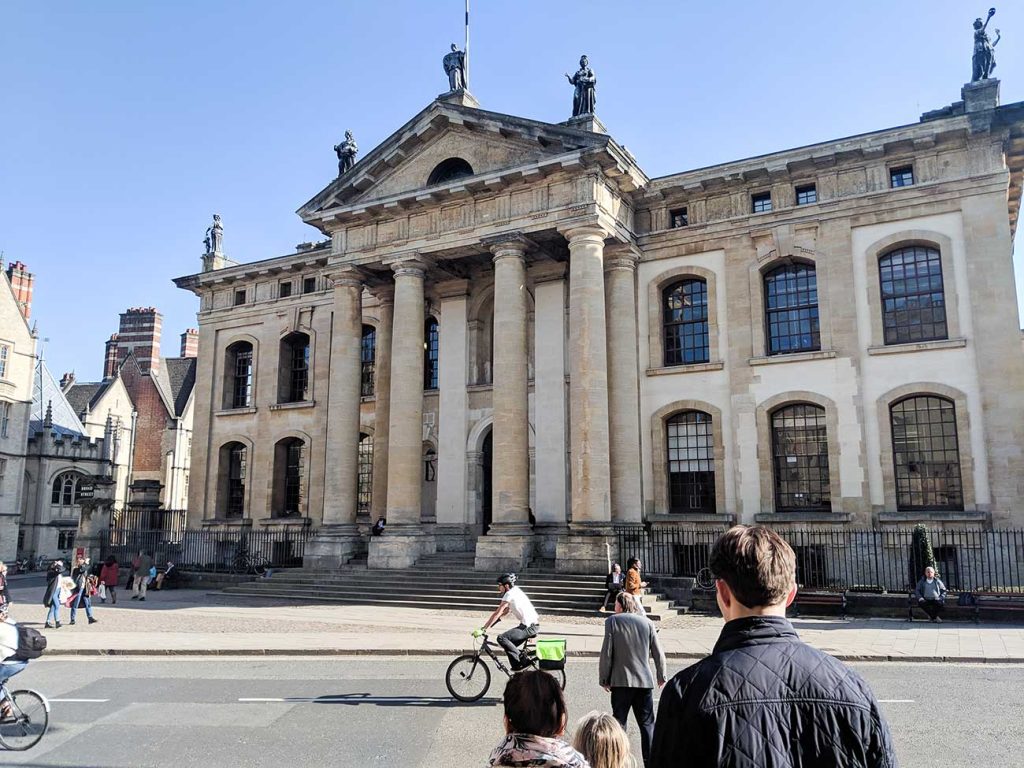 The Clarendon building in Oxford was built to honor the Greeks and their contribution to civilization, resembling the columns of the Parthenon. 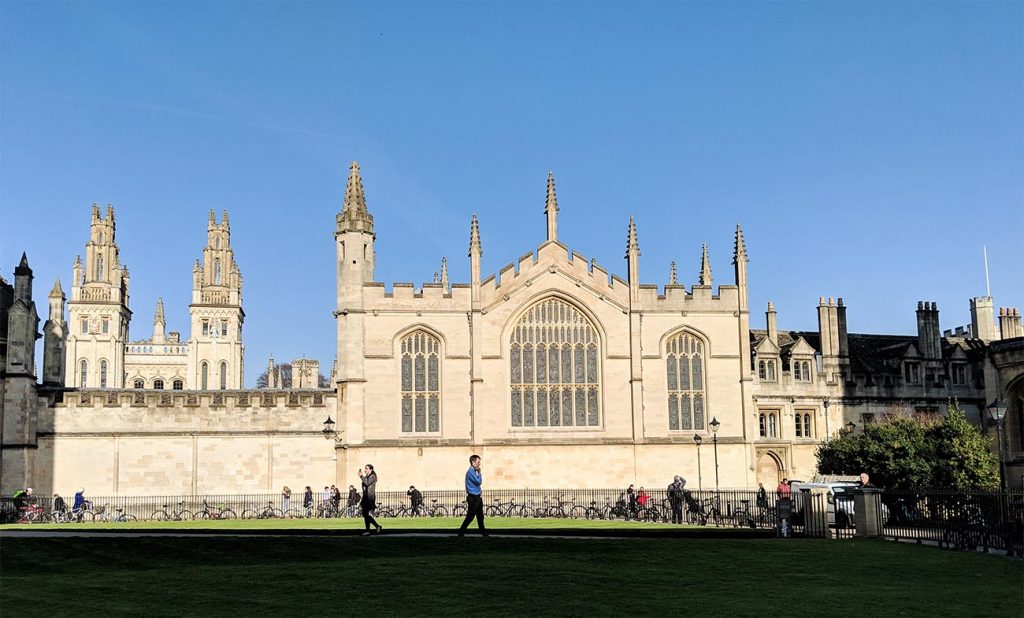 A picture of All Souls College, one of the most picturesque, on a sunny late afternoon.  It’s one of the more unique colleges because it doesn’t have students, only fellows who research. 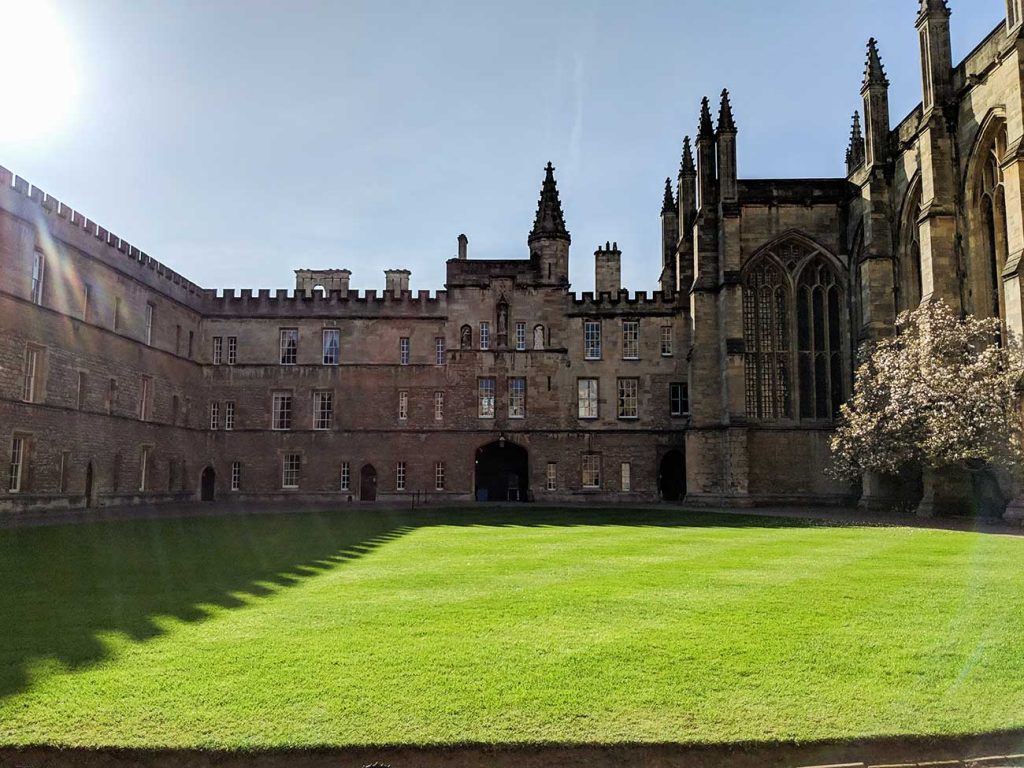 A beautiful courtyard in Hertford College. Many of the colleges throughout Oxford University allow entry to their grounds. There will most likely be a small fee for entry but it’s worth the price. We recommend visiting New College (it’s not new by any means) and Magdalen College at least.

Literary fans of C.S. Lewis and his Chronicles of Narnia, J.R.R. Tolkien and his Lord of the Rings, and Lewis Carroll and his Alice in Wonderland will love Oxford! Oh, and there’s a guy named Shakespeare who also has quite a lot going on in this town. 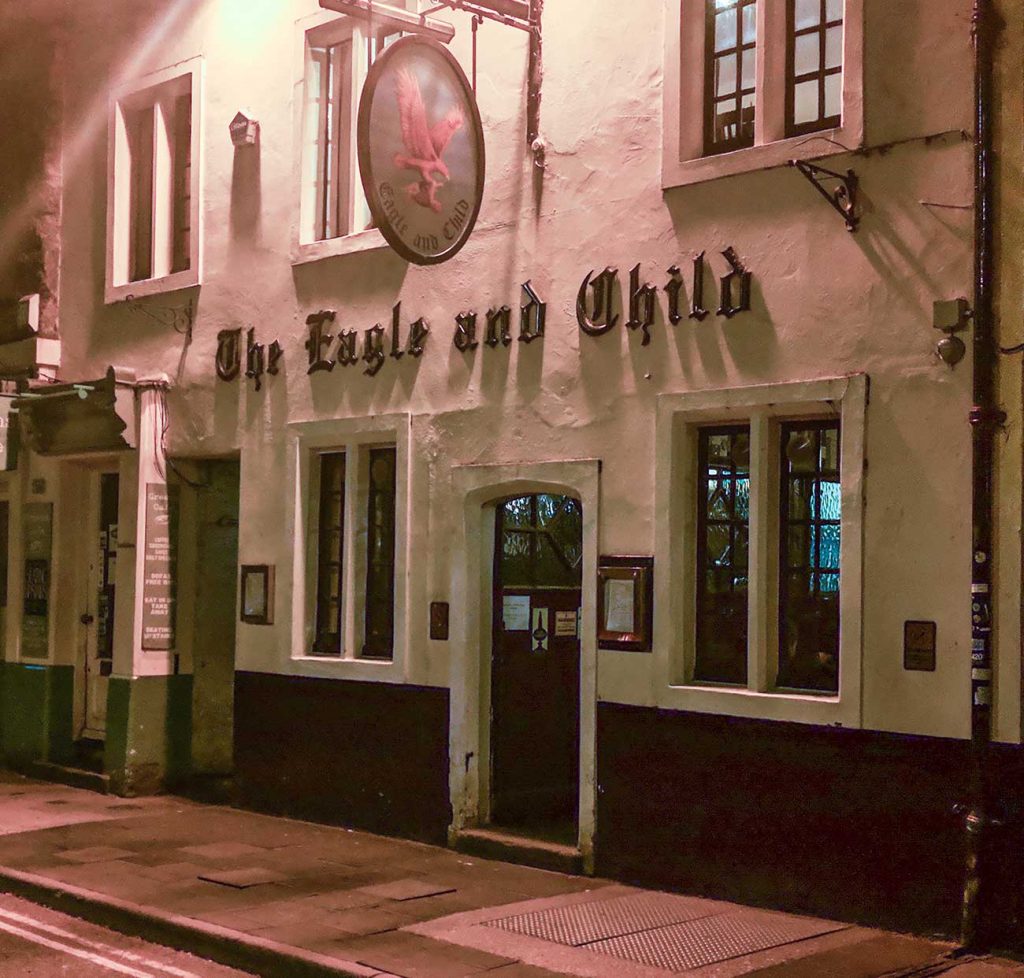 The Eagle and Child pub is where Tolkien and Lewis and the “inklings” met to trade drafts and what not. It is said that The Lion, the Witch and the Wardrobe draft was passed around here as well as other well known titles. There are a few quotes throughout the pub to remember them by. While there are other pubs that the “inklings” used to meet, The Eagle and Child is the best known. 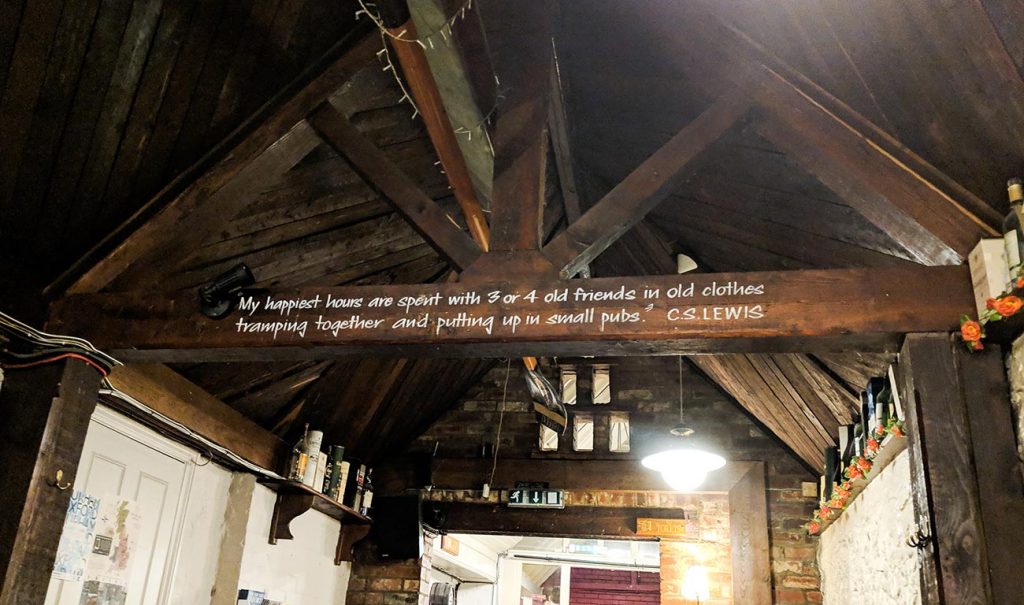 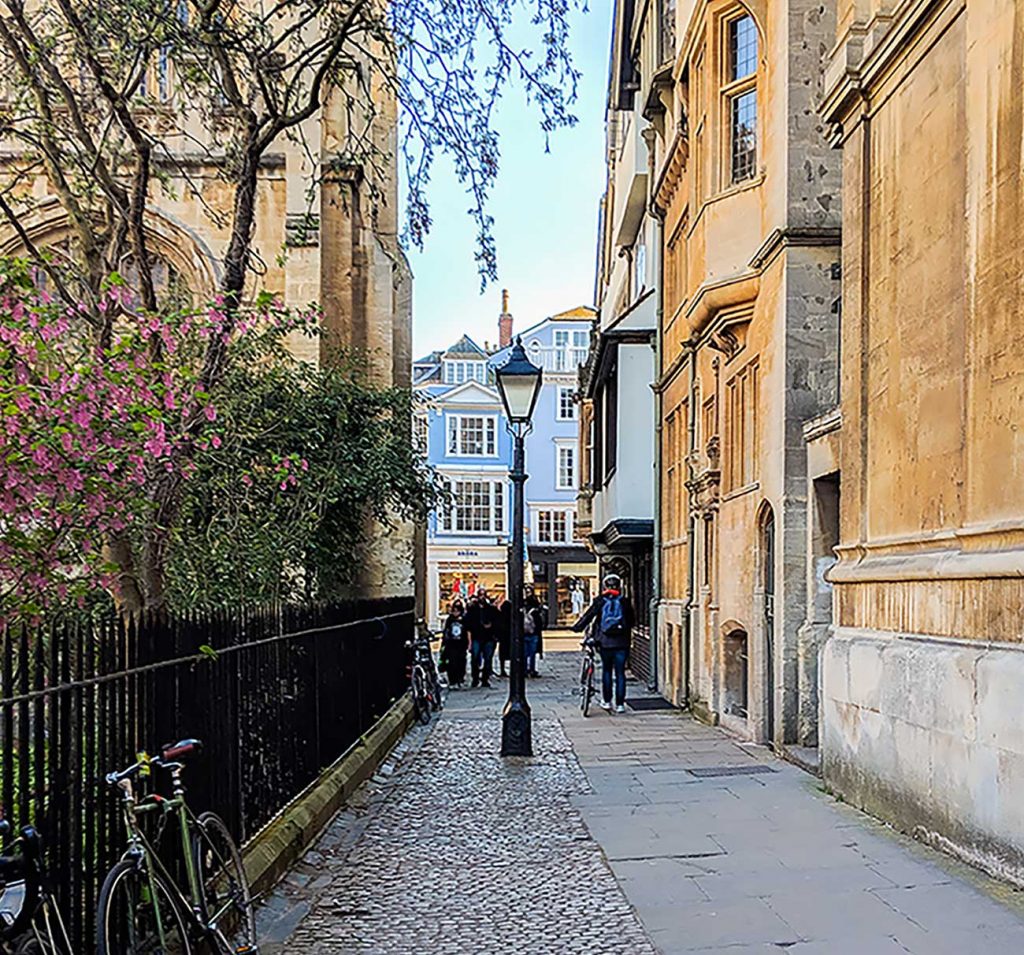 This lamp post is thought to be the inspiration for C.S. Lewis as the lamp post in Narnia in the book The Lion, the Witch and the Wardrobe. 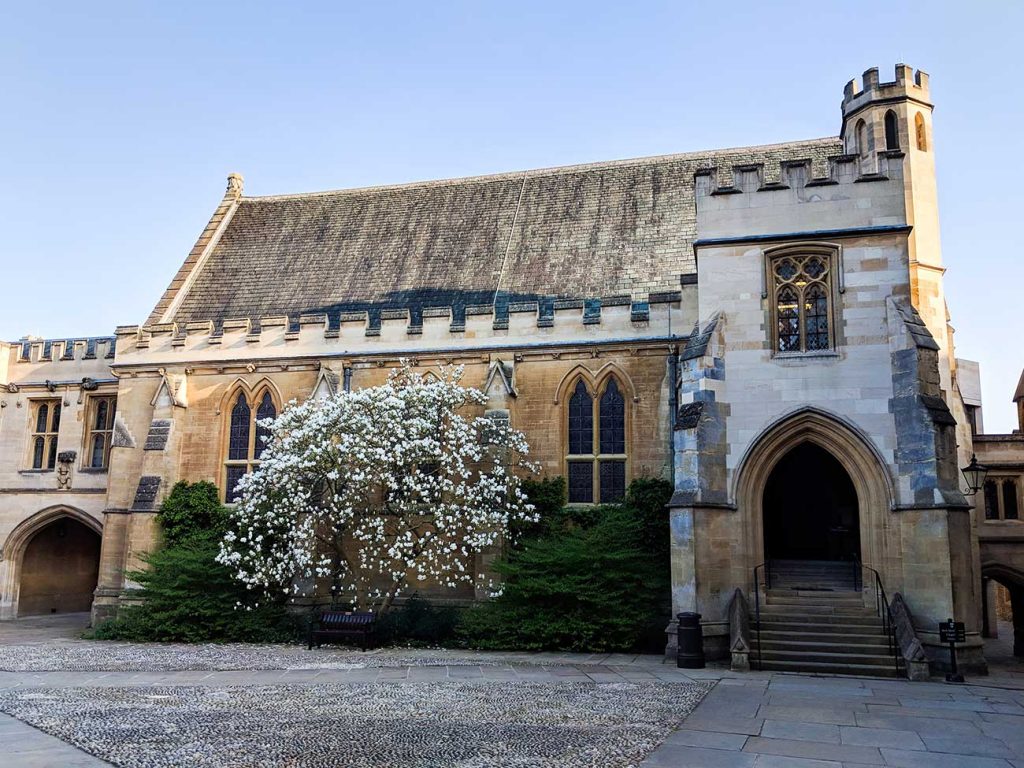 This is a picture of Merton College, where Tolkien was a professor of literature. 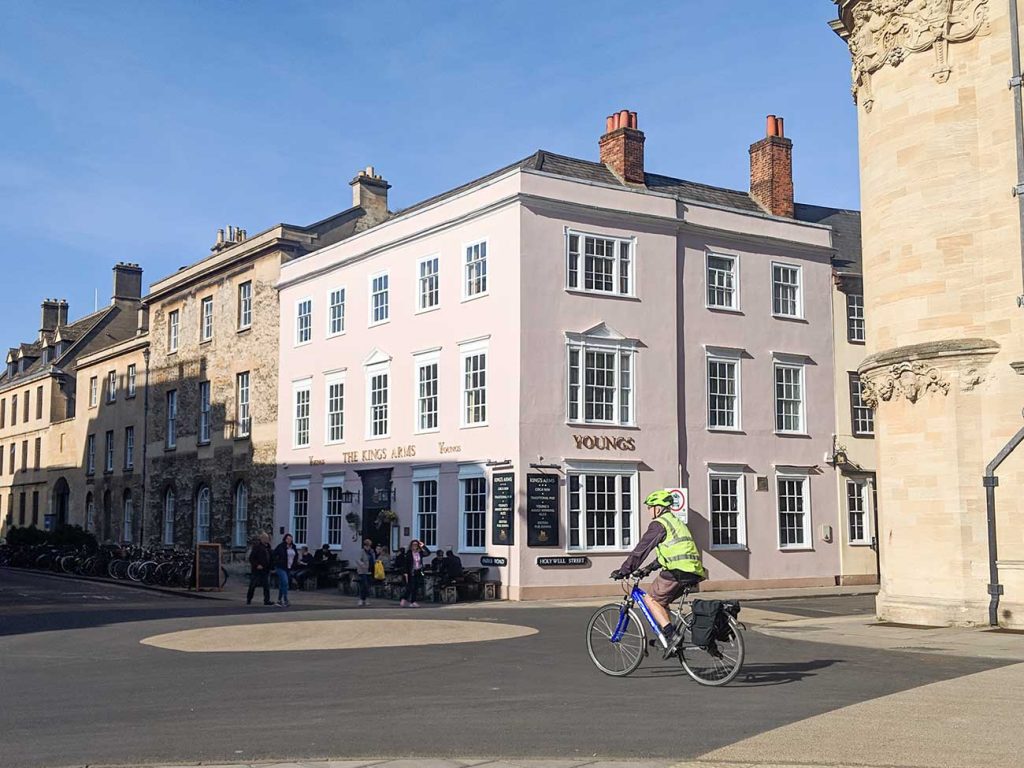 This pink pub on the corner is supposedly where Shakespeare frequented back in his time. We had a pint or two inside and it’s well worth a visit. Whether you believe it’s where he actually hung out or not, the fact that it dates back to 1600 and boasts being the oldest pub in Oxford is reason enough to have a pint! 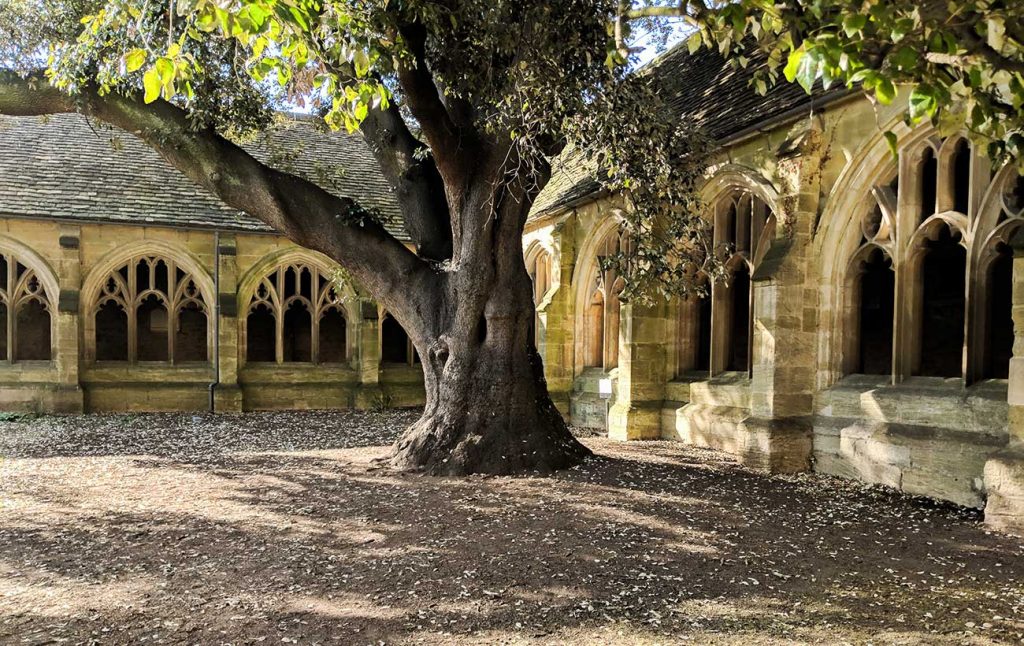 The famous tree and courtyard from Harry Potter and the Goblet of Fire, where Professor Moody turns Malfoy into a ferret. This area is part of New College and we highly recommend taking a stroll around this campus in Oxford. If you’re not a fan of Harry Potter, don’t worry. The grounds are beautiful enough by themselves and this tree and courtyard have been in many other films.

A Look Into History 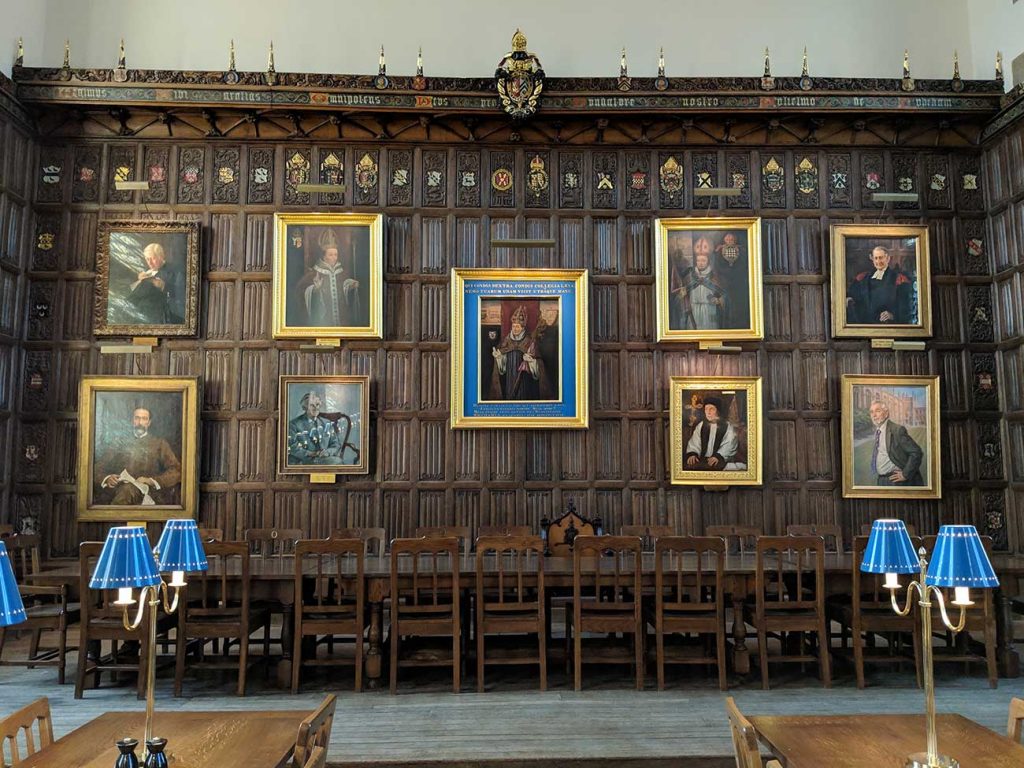 Portraits of the former head of New College and the dining hall. 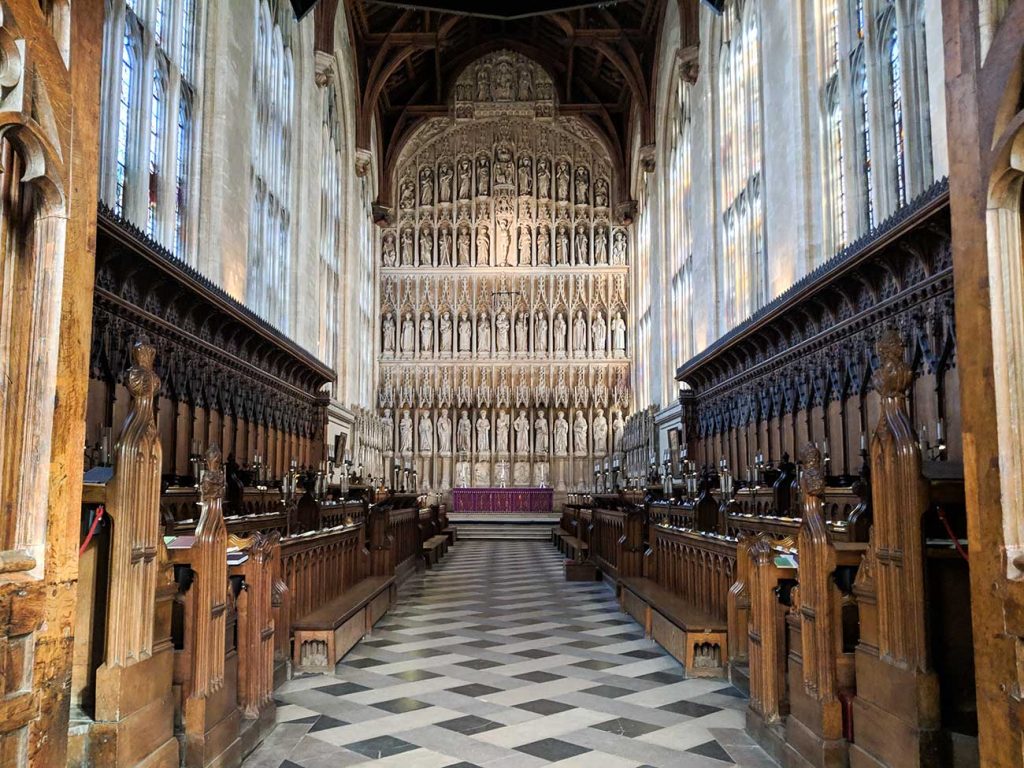 The New College Chapel. Another reason to visit New College! There is loads to see just on this one campus! 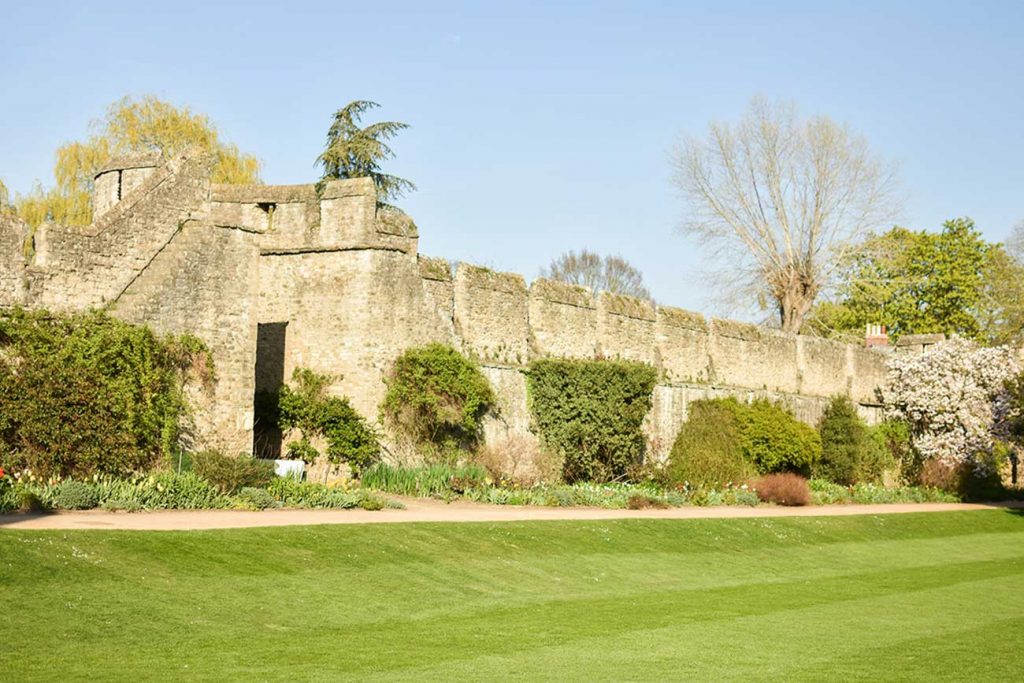 See the old medieval walls of Oxford, dating back to the 1200s.

Every building in this city has a story to tell. With a history so rich and a university that’s had many great minds come and go, Oxford is definitely worth a visit while in England. We saw it in a rush while driving south through the UK but we’d like to have more time to appreciate each college and the story behind it. Hopefully you get to when you visit!

If you’re looking for a tour of the university with a guide who knows a thing or two, check out Oxford Walking Tours website. 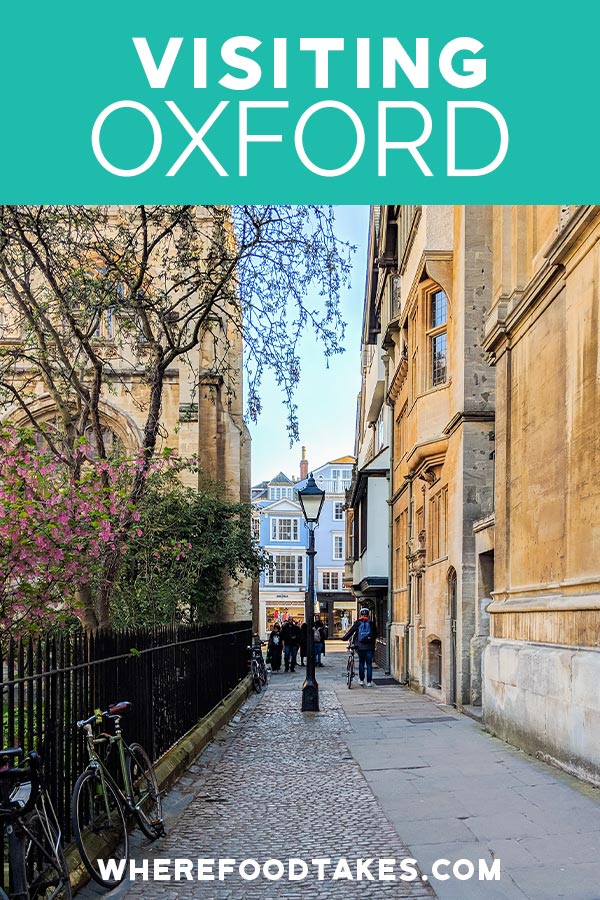 Instagram Pinterest Mix
PrevPreviousWhat to Do in Budapest: The Pearl on the Danube
NextThings to Do in Prague: The Enchanting Czech CapitalNext 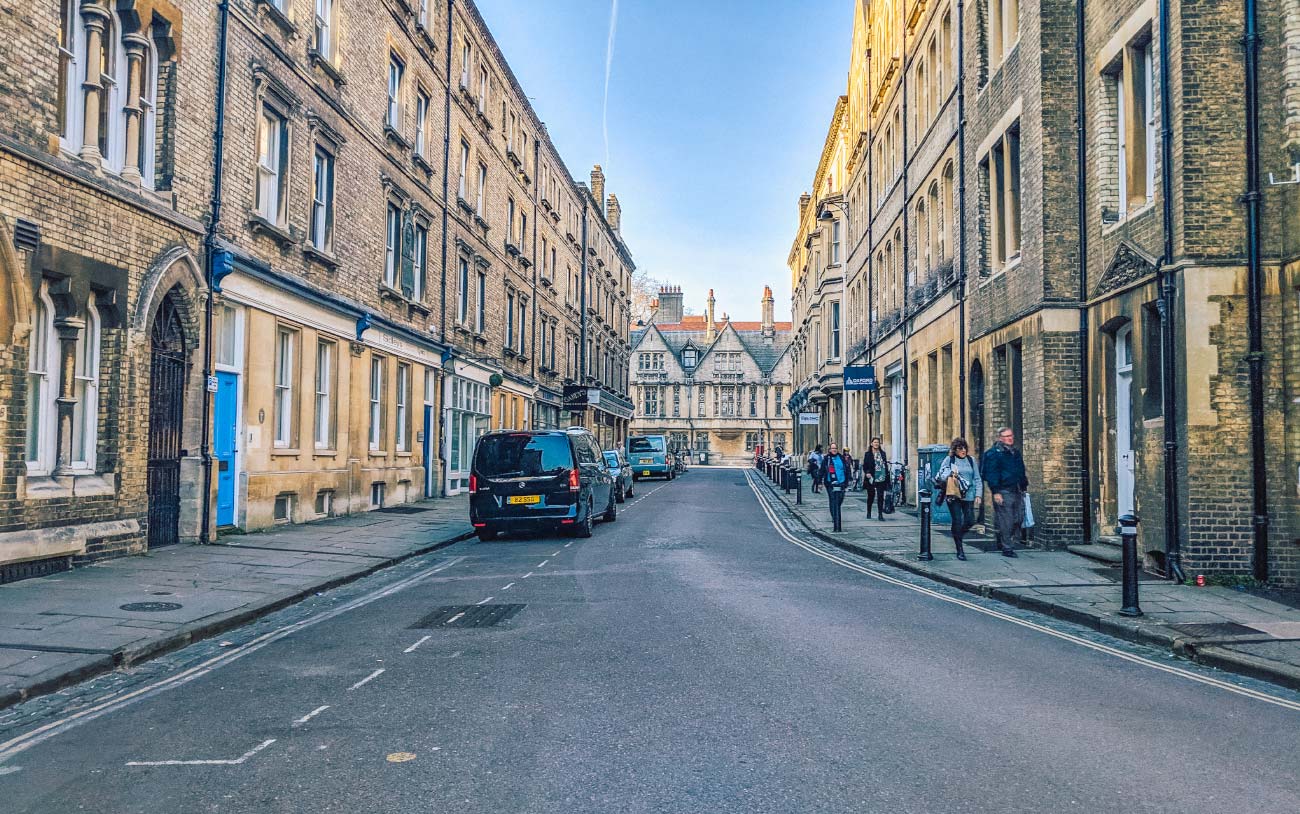 Tips for Americans (or First Timers) Driving in the UK

What’s the best way to travel the UK? By car, of course! How else can you witness the splendor of…
Read More 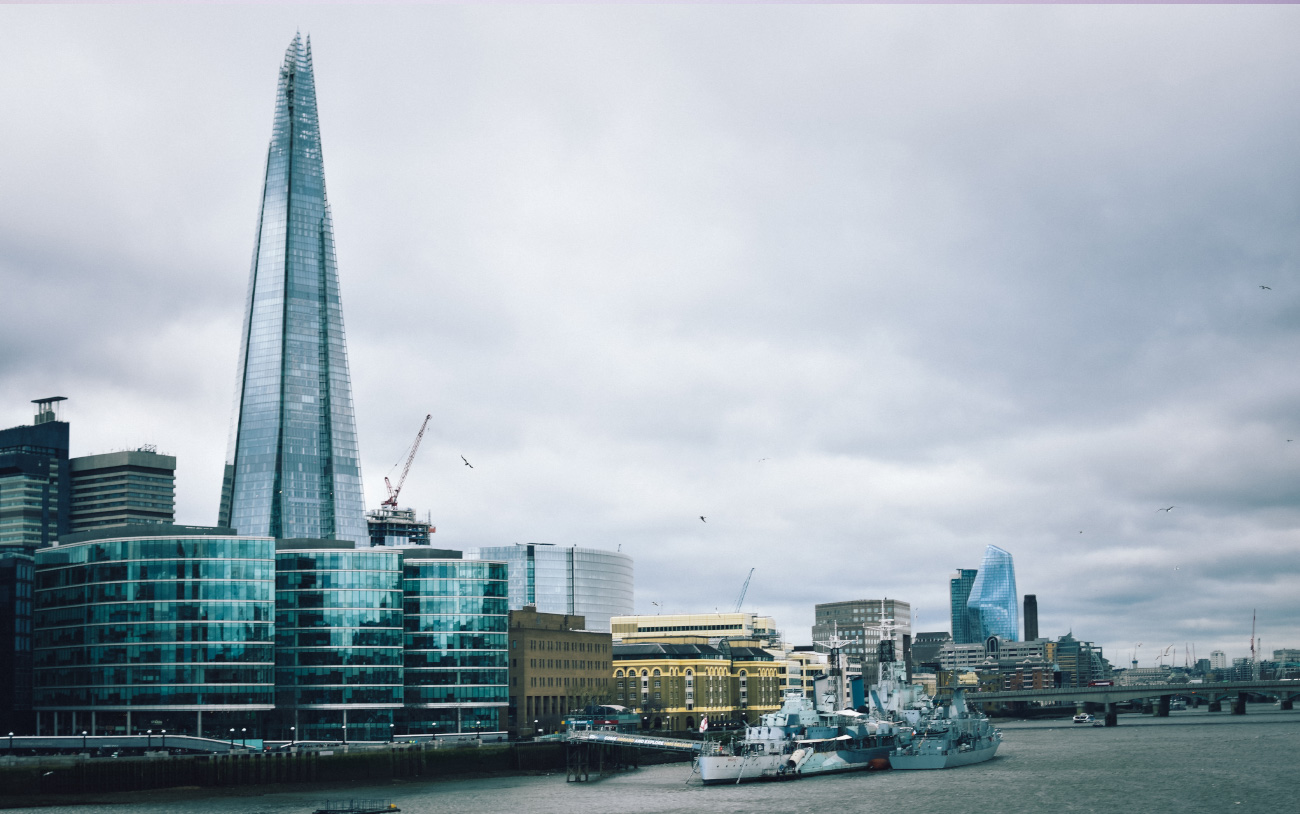 Whether it’s the beginning of your journey or you’re heading back home, why not take advantage of your 8 hour…
Read More 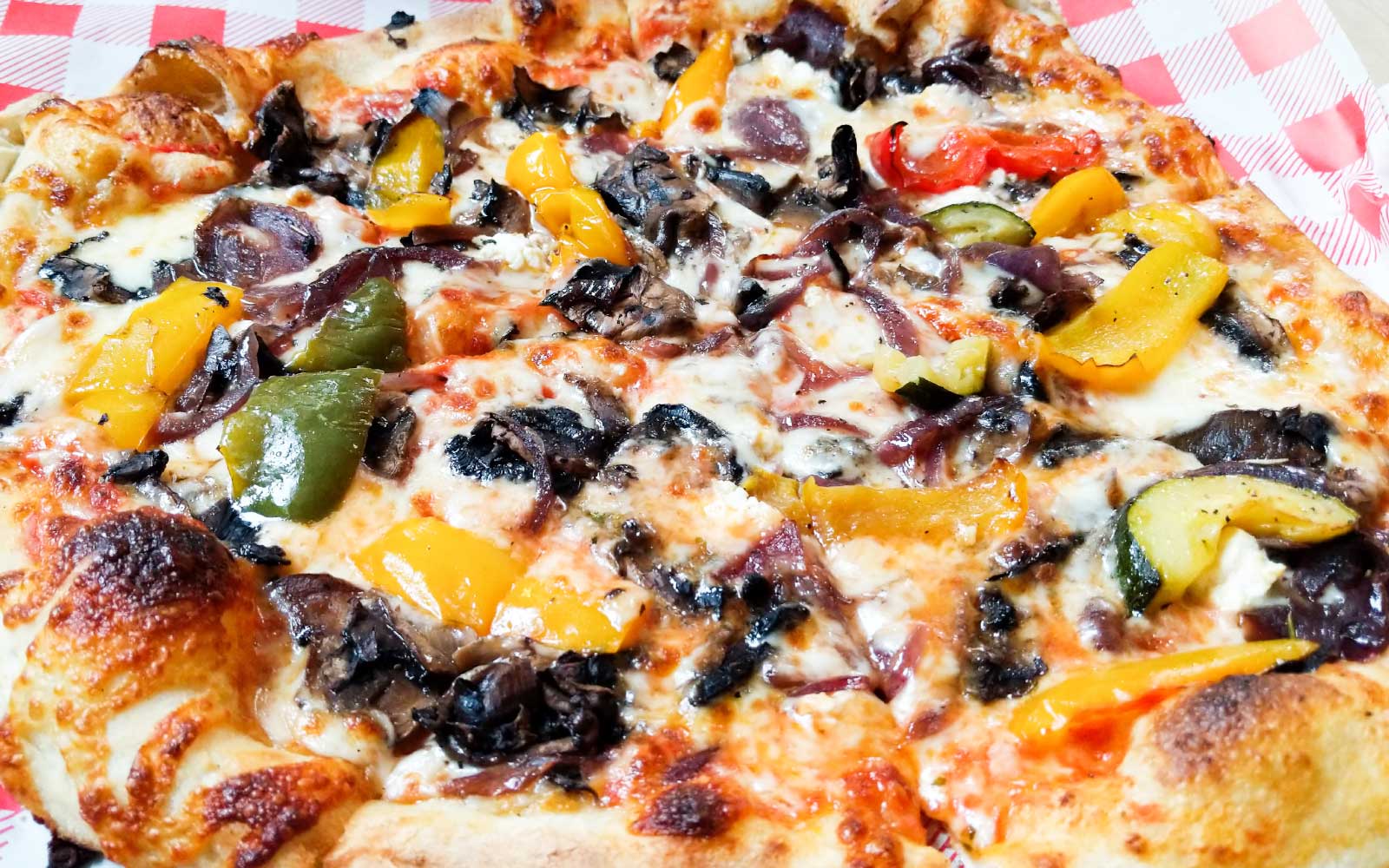 Nottingham, England, where the legend of Robin Hood thrives, was an enjoyable stop on our journey through the UK. While…
Read More