Freezing temperatures, snow, less daylight hours, traveling during winter doesn’t sound that fun. What?! We’re here to tell you otherwise. During our 30 day winter adventure in Budapest, we found an enchanting city covered in white just waiting to be explored.

Split in two by the huge Danube River, Budapest provides travelers with a picturesque winter destination. It may be cold outside but trust us, after the mulled wine and goulash, you’re going to feel all warm and fuzzy inside.

For even more ideas on things to do in this lovely city, plus more pics to prove that visiting in the winter is awesome, check out our post on what to do in Budapest! 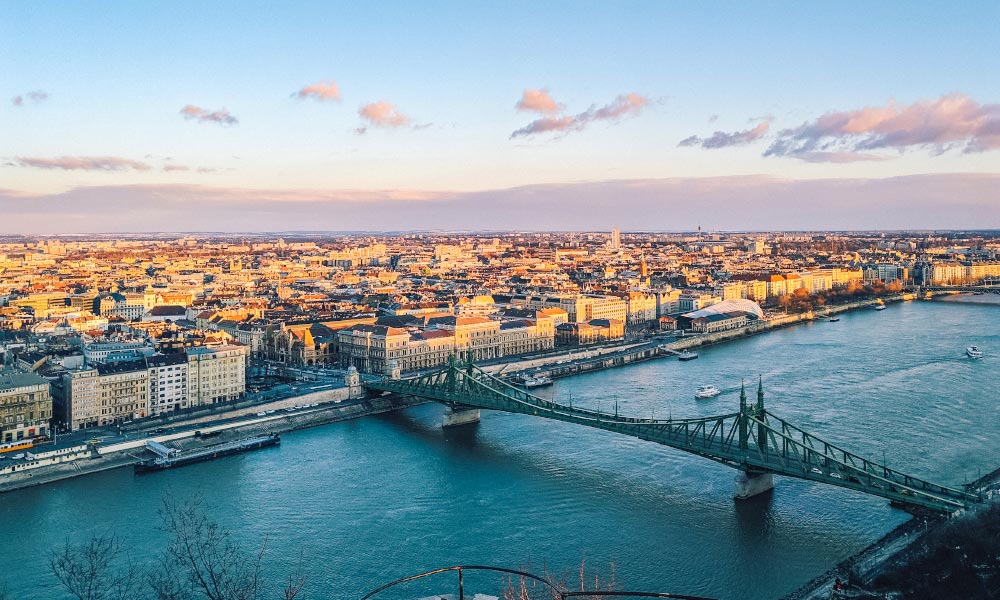 This is Why You Should Visit Budapest in Winter

We’re going to provide you with some great reasons to travel here during the cold months. Our month-long stay took place during latter December and the bulk of January. We got to see the cold, bitter and windy as well as some angelic snow.

Firstly, let’s get the obvious stuff out of the way.

This isn’t just true for Budapest, but for any tourist destination. With the possible exception of Christmas and New Year’s, prices for accommodation and transportation are much lower in the winter.

Granted, Hungary is a cheap destination already. Add in the winter factor and it’s even better. We booked our Airbnb for less than $400 USD for a whole month. We resided three blocks from a metro station and were just a 10 minute walk from the Danube. We weren’t in the very center, but being so close to the metro made up for it.

There are cheap restaurants all over as well. Of course, eating in the more touristy parts of Buda and Pest will undoubtedly be more expensive. For some great recommendations on where to eat, check out our post on great restaurants in Budapest.

Not only is winter travel cheaper but there are also less tourists. It’s a special experience when you have a huge square all to yourself or you’re touring Matthias Church and don’t feel crowded and rushed. Budapest has a ton to see, which is why visiting in winter is such a good idea!

We also went on three free walking tours with the company Trip to Budapest while staying in Budapest: the general tour, Jewish and communist. All three were fantastic and all three were pretty cold, which is why our groups were smaller and more intimate. That said, bundle up! It even started to snow during our communist tour, which ended by the famous parliament building. It was perfect!

Ok, now for some specifics about why Budapest is awesome in winter. 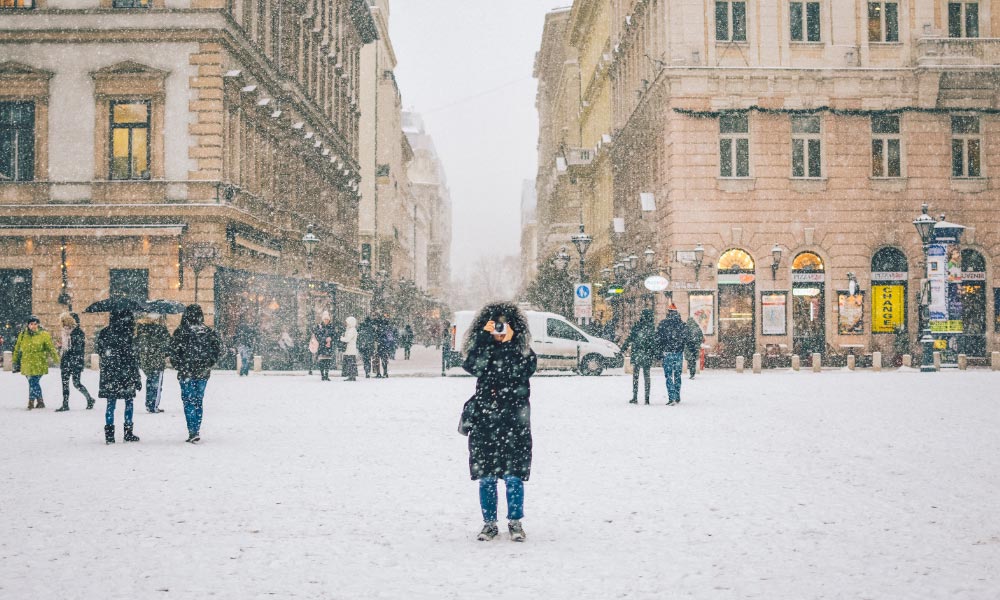 One of the perks of staying long term in the city was that we had a good chance of seeing some snow. Turns out we saw a lot! It snowed many times and stuck around. However, there were a couple days where it snowed heavy. We couldn’t have timed it better as we were standing just in front of St. Stephen’s Basilica in the huge square. 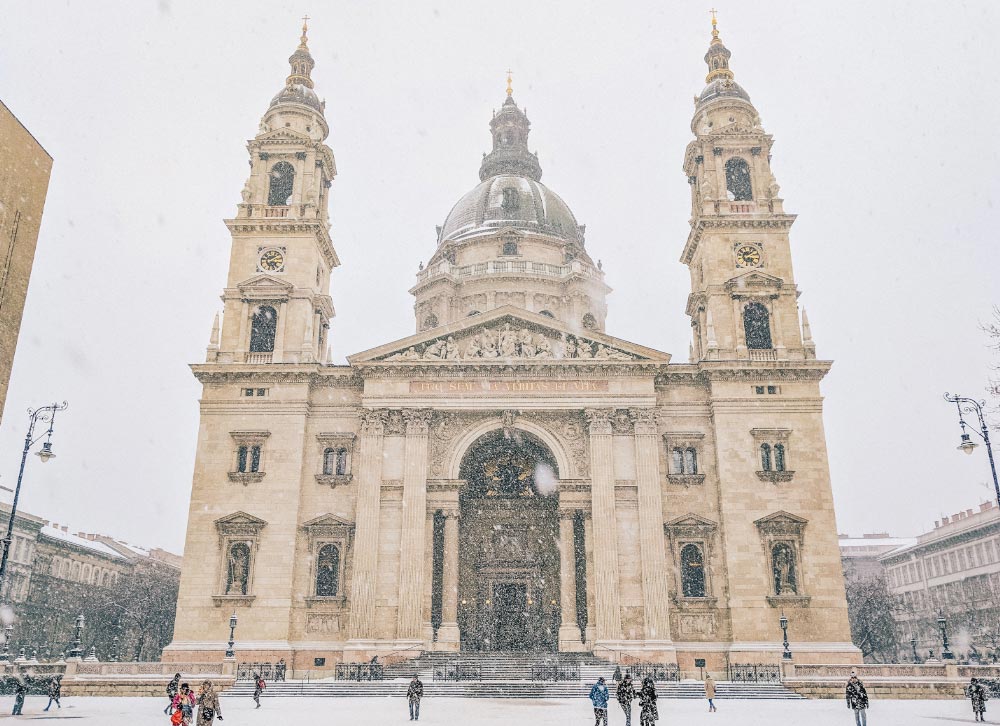 Be sure to head inside but also take the elevator up to the lookout point, especially if it has snowed recently. The rooftops will be covered in white. Maybe you’ll get lucky like us and have snow on the day you visit this place! For more insight see our post on visiting St. Stephen’s Basilica in winter. 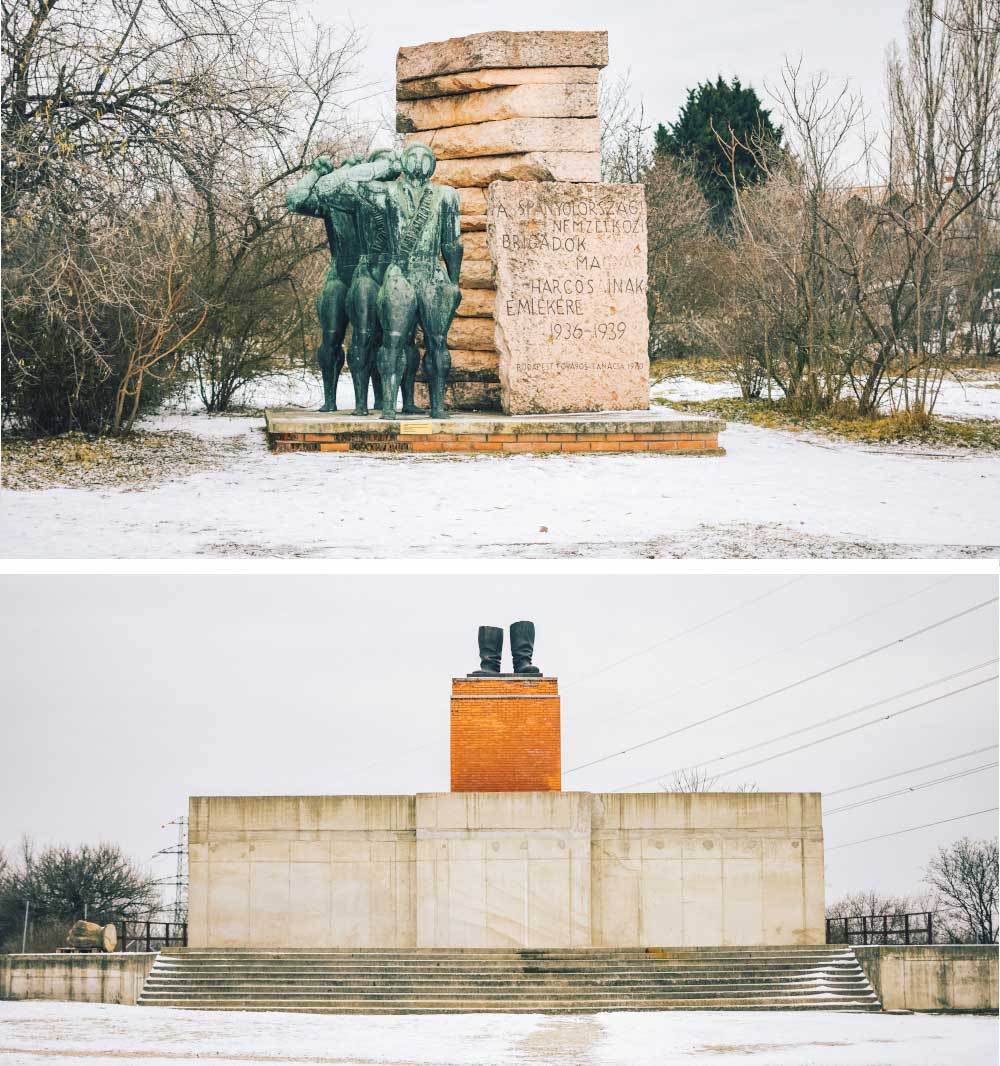 This is where the old communist regime statues are kept and is a perfect visit for a cold and cloudy day. The communist tour was very informative but also pretty bleak. It was a pretty bleak day when we visited Memento Park so we thought it fitting.

Matthais Church and the Fisherman’s Bastion 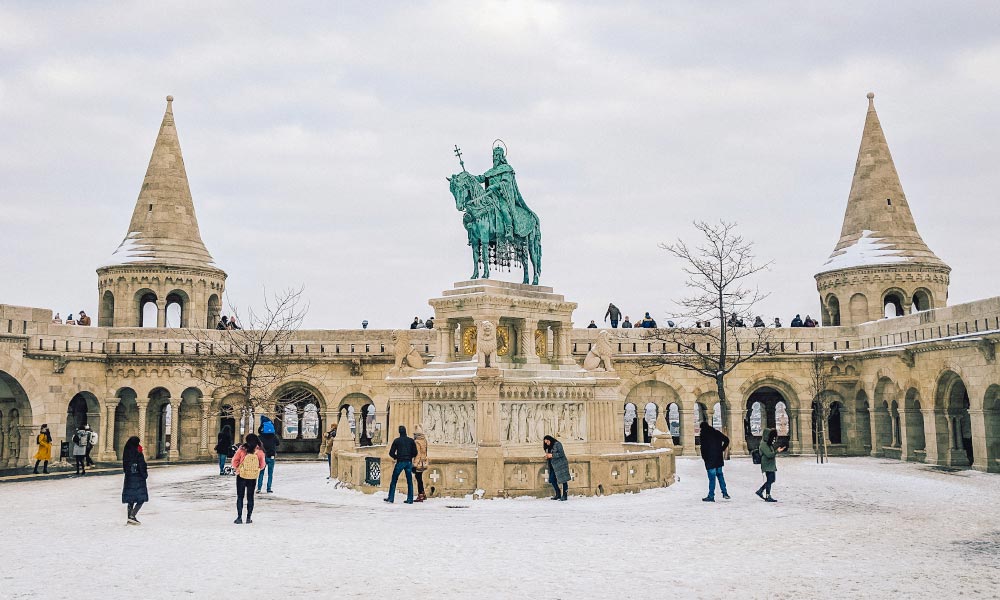 If you’re only visiting Budapest for a short time then make sure you at least go to Matthais Church. The inside is beautiful but the grounds around it are impressive as well, especially…you guessed it…covered in snow! Get some great shots of Pest from here as well. 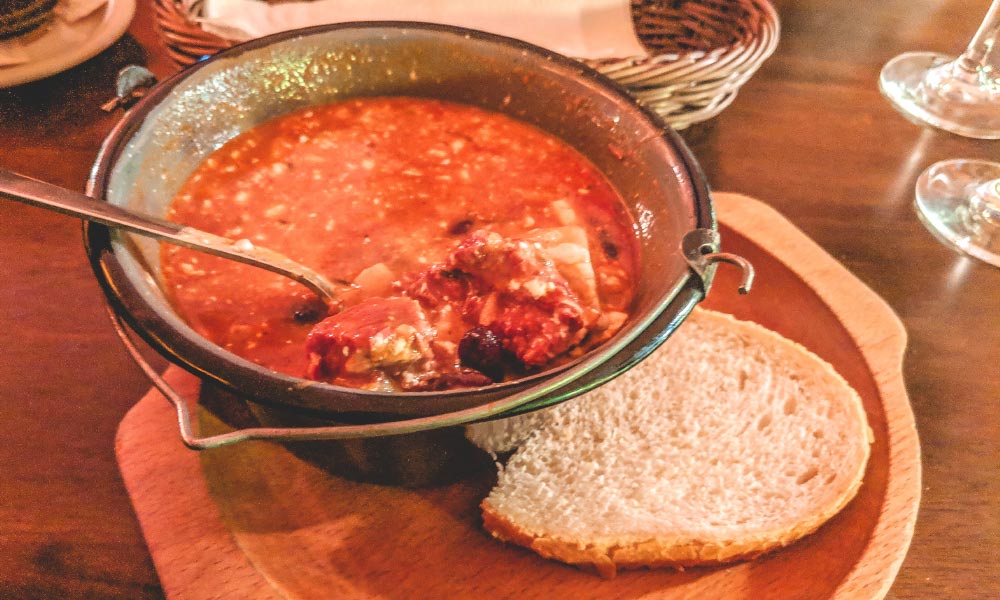 A Hungarian delight that you must try in Budapest, goulash is just what the doctor ordered in winter time. It’s hot, hearty, and full of goodness. Better yet, it’s cheap! We tried it multiple times and after walking in the cold for a few hours, this hit the spot! 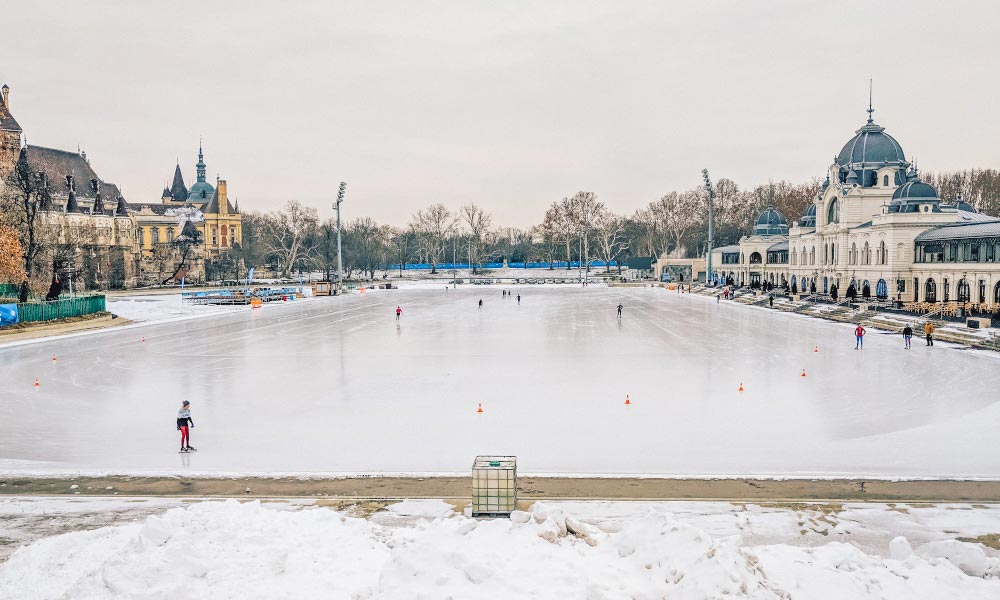 Like ice skating? This historic ice rink, dating back to the 19th century, is absolutely massive. Even if you’re not into skating there’s plenty nearby to do. Heroes’ Square is next door as well as Vajdahunyad Castle. 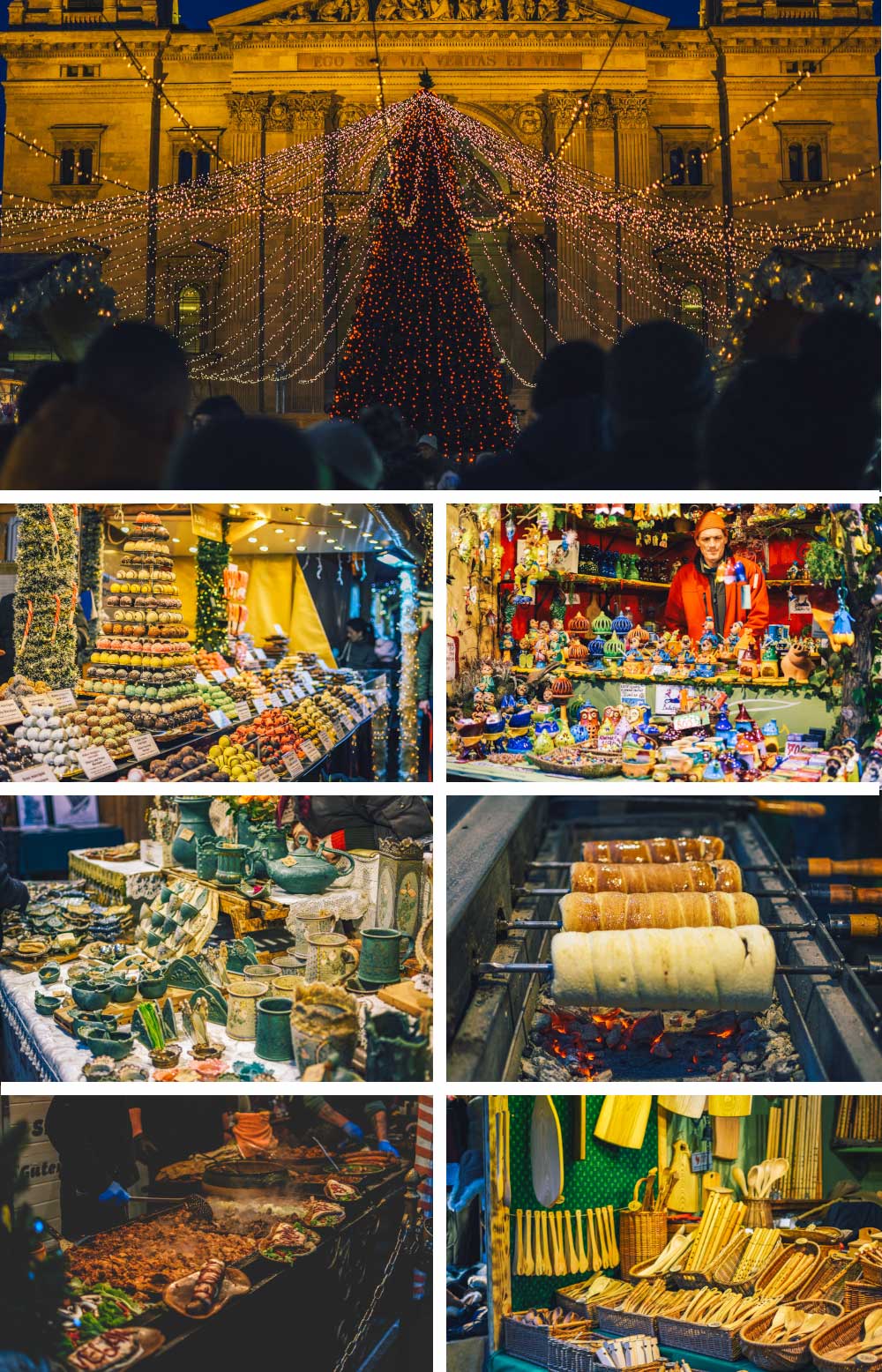 Of course, visiting Europe in winter (December) means Christmas markets! Budapest’s Christmas market is huge and has everyone’s favorite seasonal drink: mulled wine. Buy it on the edge of the market for better prices!

Be sure to visit the market at night and find your way to St. Stephen’s Basilica for a cool light show. And do not leave the market without trying a potato pancake with sour cream, cheese, and bacon! Yum!

Different from the Christmas market but no less spectacular, the market halls in Budapest are a must. If you can only visit one, then be sure to head inside the Central Market Hall, the largest of them. Even if you don’t buy any of the fresh produce or stop by the butcher, a walk through is in order.

However, our favorite market is Rákóczi Market Hall. It’s located just outside the metro stop of the same name, Rákóczi, and is much less crowded. The best part is the wine lady! Bring an empty plastic bottle (or buy one on the spot) and have her fill you up with your choice of vintage. Just for a few bucks! 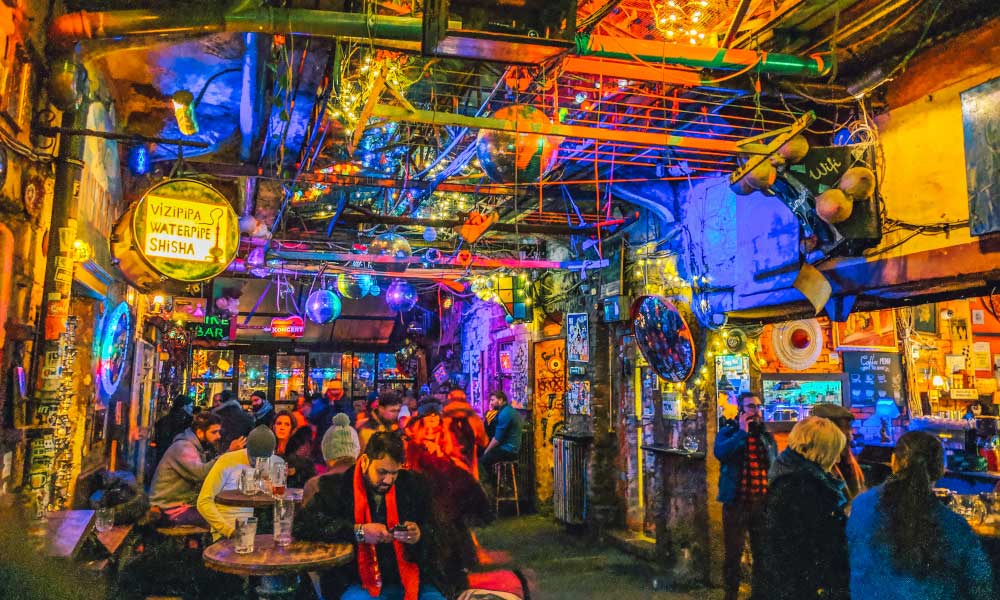 Beer isn’t most people’s choice for a drink on a really cold evening. Have a few though and you won’t notice. But don’t stay in the same spot too long! Budapest is full of places to grab a drink, known as ruin pubs (bars). We loved them so much we wrote a post about some that we visited. For where to have a fun evening out during those cold winter nights, read out post on ruin pubs in Budapest! 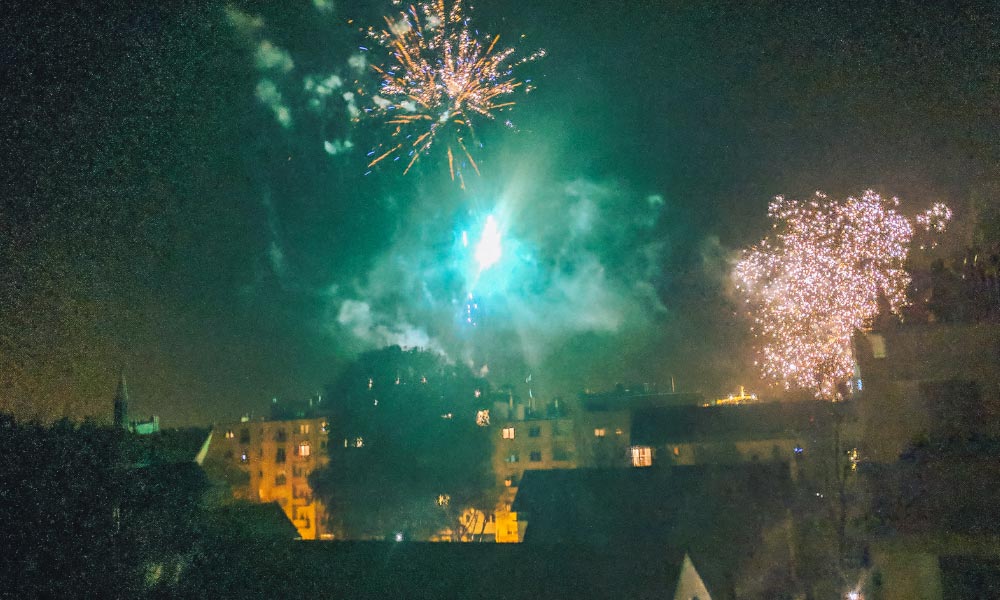 Budapest is a happening place on New Year’s Eve. There are official firework shows happening all over the city but the best part of the night is the locals. Fireworks were going off from random apartment building rooftops and in the street. It was quite a sight to see and a fun place to ring in the new year!

Warm Up at a Thermal Bath

Food and drink can warm you up but nothing beats a thermal bath. There are so many scattered about town, from touristy to local and pricey to cheap. For a more local experience, check out Lukács Bath but the most talked about bath is Széchenyi. It’s up to you! 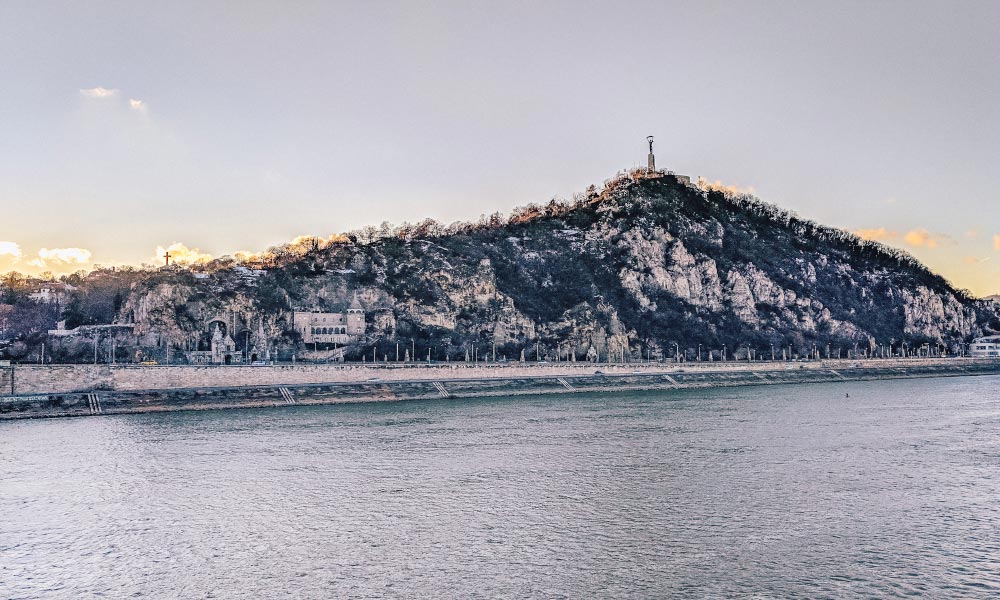 This was one of our favorite things to do in Budapest but be aware that it’s a very cold adventure in winter! The good news is that after you make the climb, there’s a truck selling mulled wine. It may have been a little overpriced but when you’re freezing it doesn’t matter! He left a little after 5 pm.

Why should you climb Gellért Hill? The amazing view of Budapest in winter. Enough said. Plan your ascent near sunset for a spectacular photo. It’s free! There are restrooms for a small fee.

Summary of Why You Should Visit Budapest in Winter 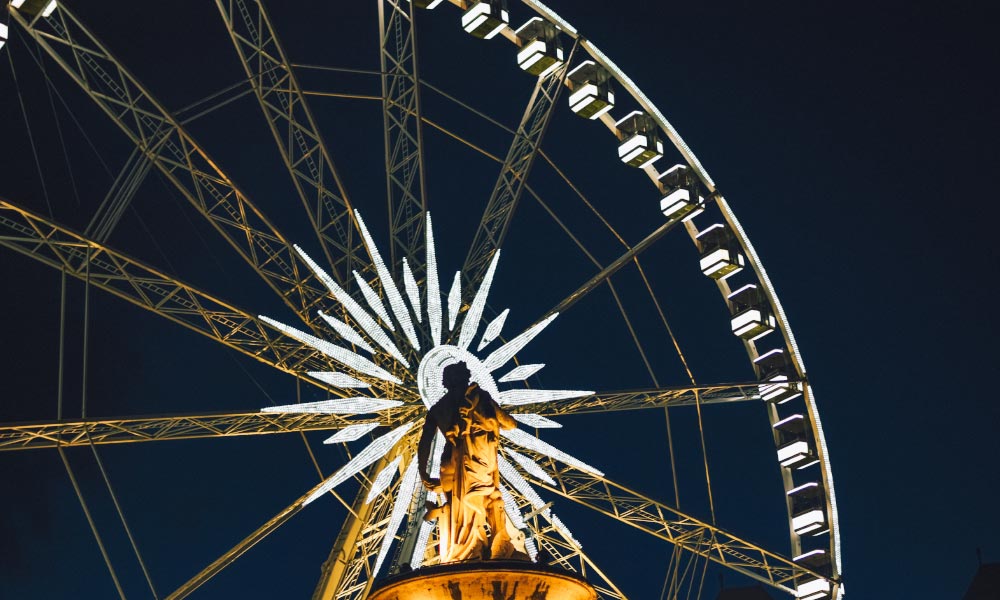 The food, the prices, the atmosphere, the snow, we hope we’ve helped inspire you to visit Budapest in the winter. Having traversed Europe for a long time, it’s one of our most memorable destinations. Maybe it will be one of yours too! 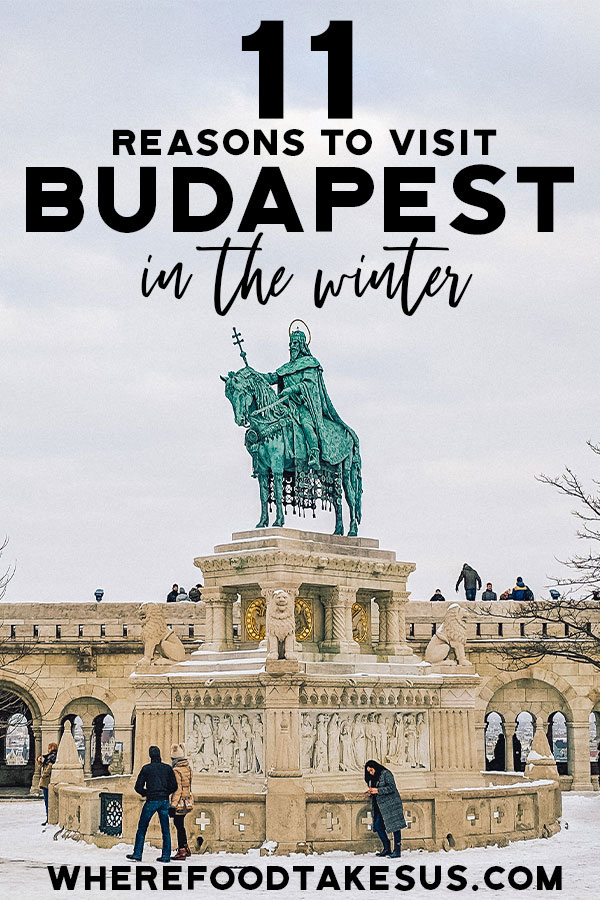 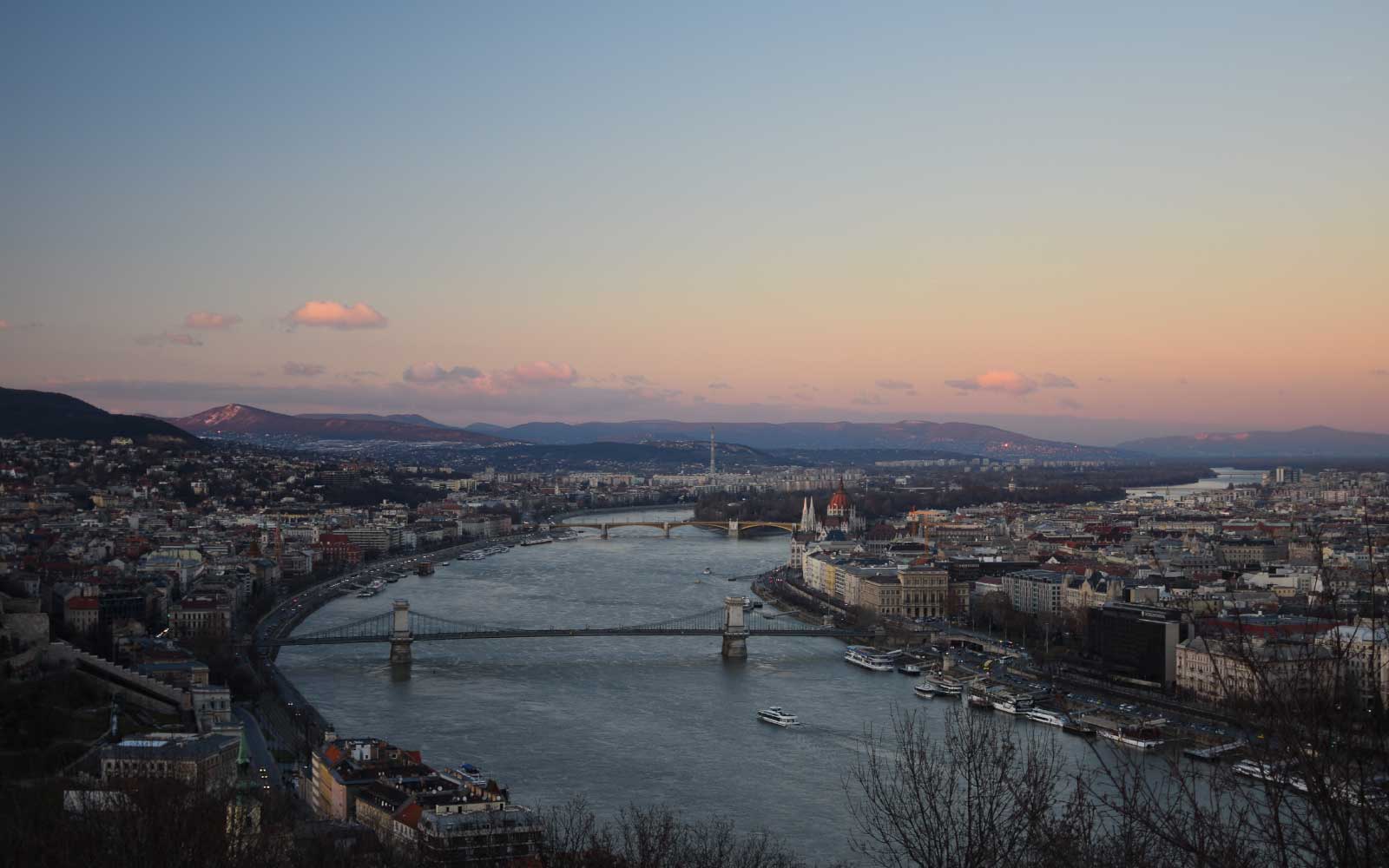 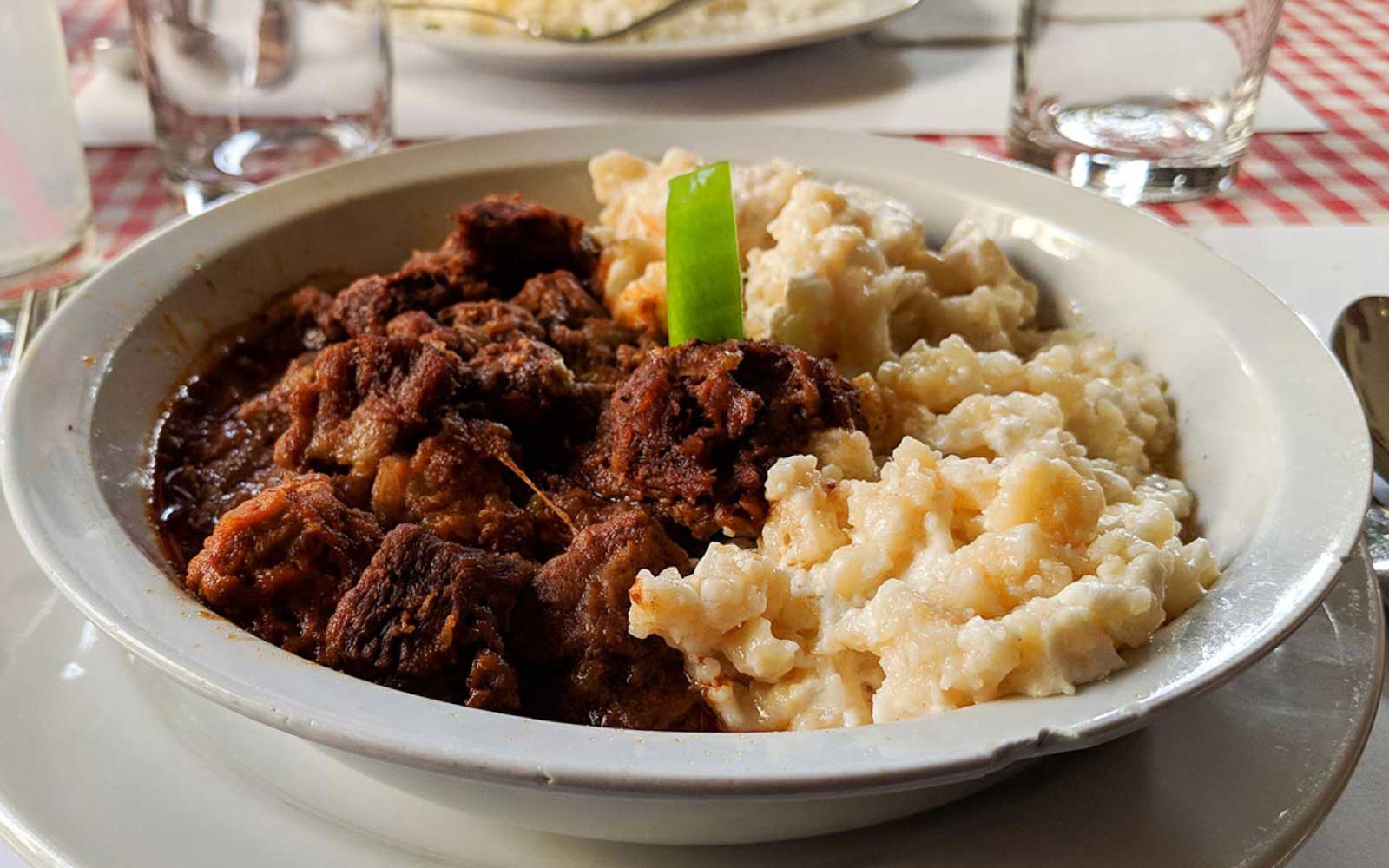 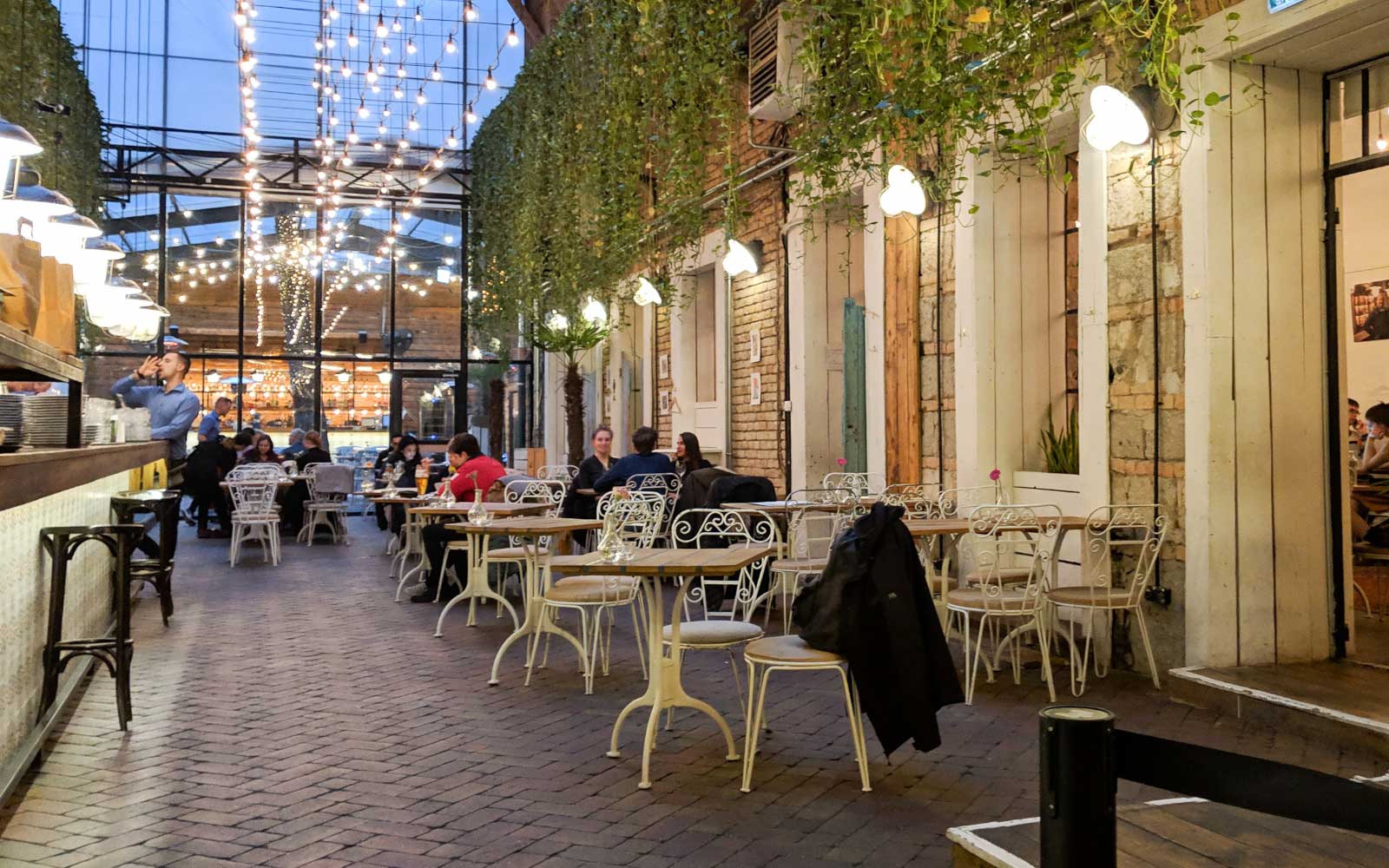 If you’ve ever searched anything like “what to do in Budapest” then you’ve probably stumbled across ruin pubs. These famous…
Read More