The Ultimate Guide to Pompeii on a Budget

The Ultimate Guide to Pompeii on a Budget

Pompeii is one of the most visited attractions in Italy and rightfully so. With Vesuvius towering in the distance, you’re able to walk back in time and witness how life in the Roman city of Pompeii was lived before the massive eruption in 79AD. From impressive mosaics, columns, the amphitheater and the famous brothel, Pompeii is a must visit in this region of Italy. You have options on how to visit this historic place, whether on your own or by tour, and we’d like to talk about some of the best ways to enjoy Pompeii on a budget. 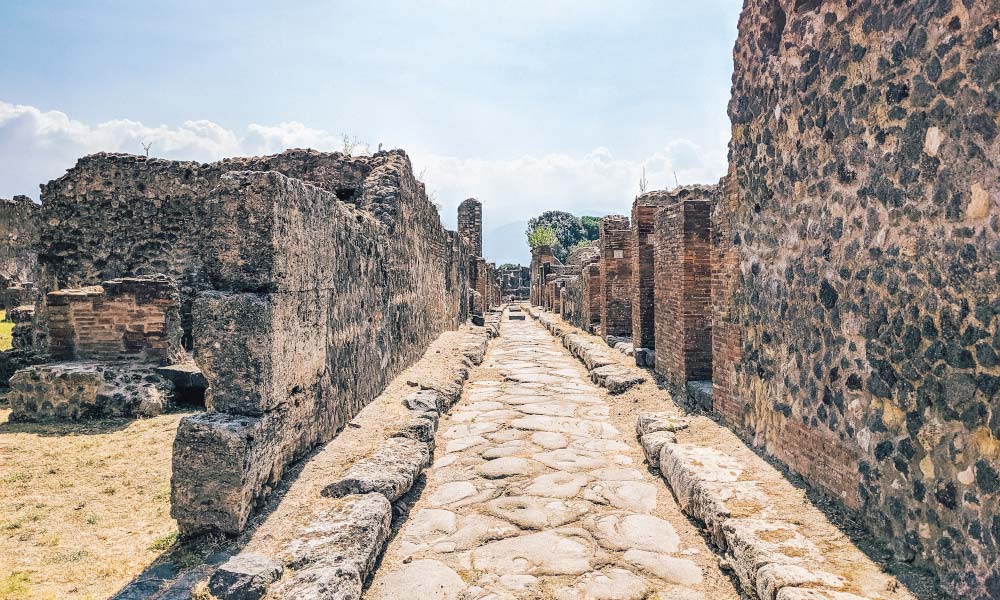 In this post, we share some tips on how to see and appreciate Pompeii on your own and in a cheaper fashion, saving you money on tours.

If you are looking for a tour then TripAdvisor and Airbnb Experiences are filled to the brim with tour options. Be mindful when you make a purchase, as most tours do not include the entrance fee.

How to Get to Pompeii On Your Own 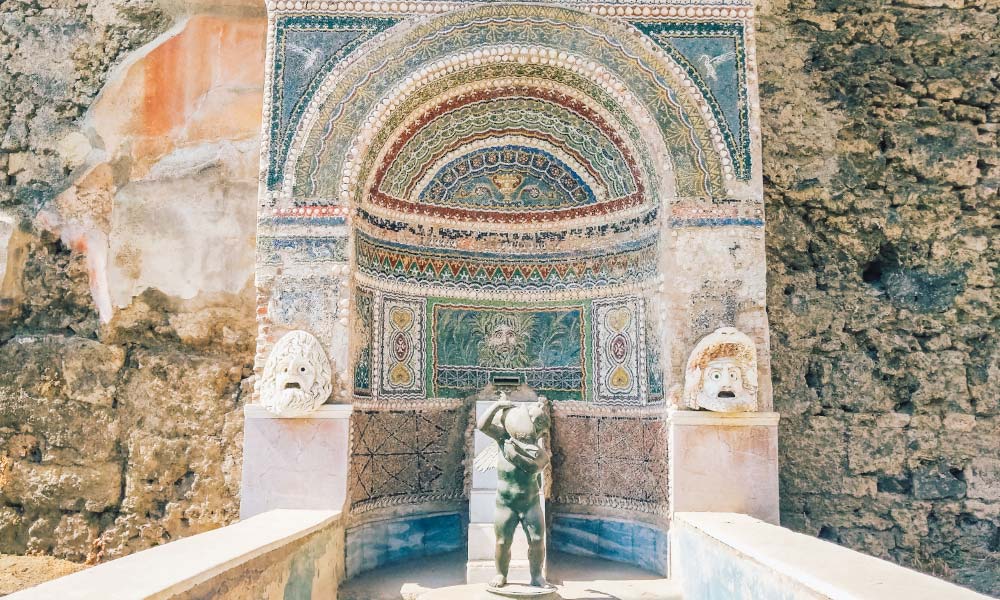 If you’re staying in Rome and making the journey south to Pompeii, then first head to TrenItalia and get your tickets to Napoli Garibaldi (main station in Naples). You can also just purchase them in the train station at the automated ticket machine.

From Naples, you have two options and both are feasible for a budget trip to Pompeii.

Look for the Sorrento route (there are only 4 platforms, when we went the train was always on platform 3) and you’ll get off at Pompei Scavi. You can find more info on train times through Visit Pompeii’s website.

A one way ticket to Pompeii from Naples will cost 2.60 euros. Be prepared for a pretty crowded ride. If going during hotter weather, be prepared to sweat with the locals!

It’s not that expensive so we think this is a great option as it’s the express and gets you to Pompeii much faster. We personally didn’t take it but wish we had! It’s around 6 euros one way from Naples to Pompeii and only takes 30 minutes. See Visit Pompeii’s page for more info on this express train to Sorrento.

When to Visit Pompeii 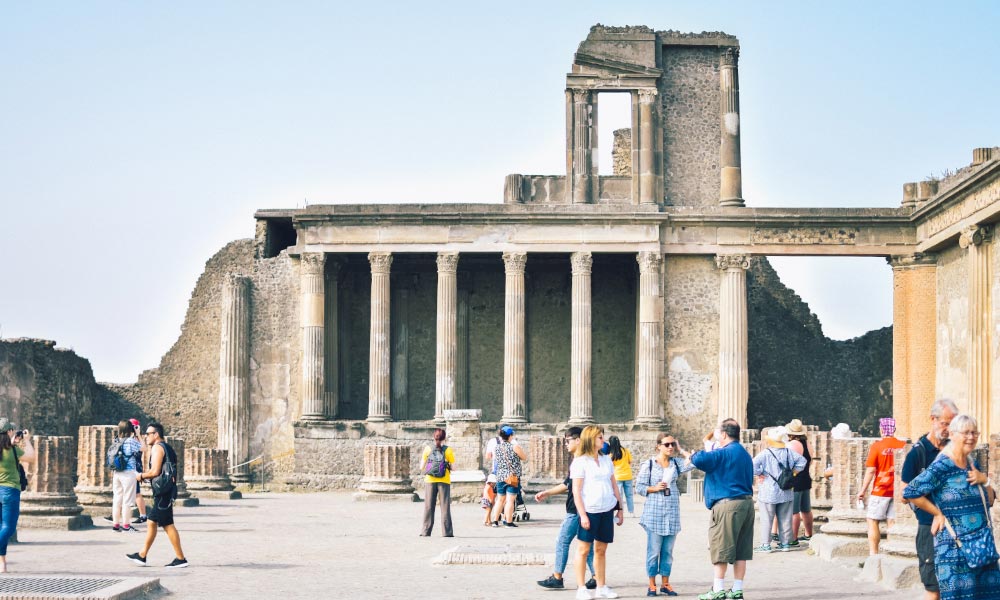 As budget travelers, we’re big fans of visiting touristy places, like Pompeii, during shoulder season or offseason. We traveled Napoli during mid-September and found Pompeii to still be pretty crowded.

So, if you really want to avoid the crowds we recommend planning your visit from October to March. As a bonus, the 1st Sunday of every month is free from October to March so it’s a win-win! The weather in Naples and Pompeii is fairly pleasant even later into the year (on average) so don’t rule out the winter months as a good budget option!

In terms of what time of day to visit, we think the earlier the better! Some tour groups start pretty early to have their own space and you should do the same. Come noon, Pompeii will have quite a lot of tour groups being led around and you’ll have to squeeze between them. 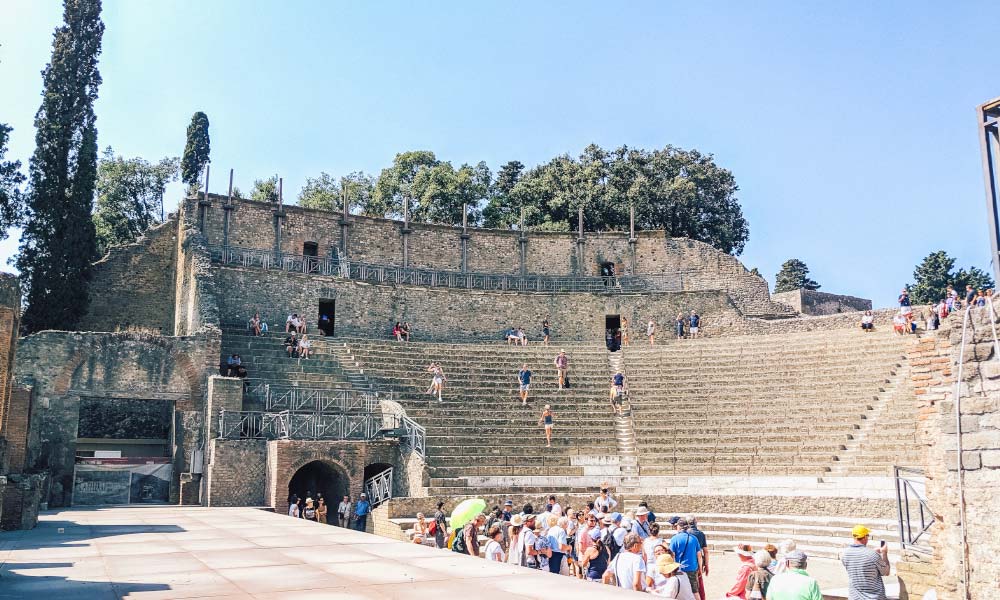 The entry fee is 15 euros per person and you can find more info on certain discounts and days they are closed at the official Pompeii website.

If weather is forecast to be very hot, you might want to think about going another day. Hard to say no when you’re on holiday and time is limited but there is barely any shade within Pompeii so a hot day could be miserable. Be sure and bring a refillable water bottle with you as there are some fountains where you can refill. The temperature was in the mid-80s F when we visited and it definitely quickened our exhaustion.

Of course, you’re going to make your own choice but we are glad we did not take an organized tour of Pompeii. Not only do tours cost more, but there are just so many groups seeing the exact same sights at the same time. It didn’t seem like it would be very enjoyable to us. We had to weave in and out of groups blocking doors so we could get by and we’re sure that interrupted their experience, making a tour seem more frustrating.

Free and Very Affordable Apps to Enhance Your Experience

Pompeii would be hard to truly appreciate if you didn’t have some idea about the story behind it. Instead of paying extra for a tour, we recommend looking into free (or cheap) apps that guide you through Pompeii at your own pace.

If you’d rather purchase an audio guide from the ticket office, you can pay around 7 euros for one but we don’t think they’re loud enough for you to share.  However, we didn’t use them; we just observed that everyone with an audioguide wasn’t trying to share it.


We personally used Rick Steves’ free Pompeii walkthrough (through his Rick Steve’s Europe app), a 40 minute guide to the main attractions and fun facts about Pompeii. It’s not just a 40 minute trip then you’re done. There are so many stops along the way to the points of interest so you spend much longer wandering around. There’s a picture to take at every turn. We spent over two hours in Pompeii, going our own direction sometimes, and loved it!

Apps to Guide Your Visit of Pompeii 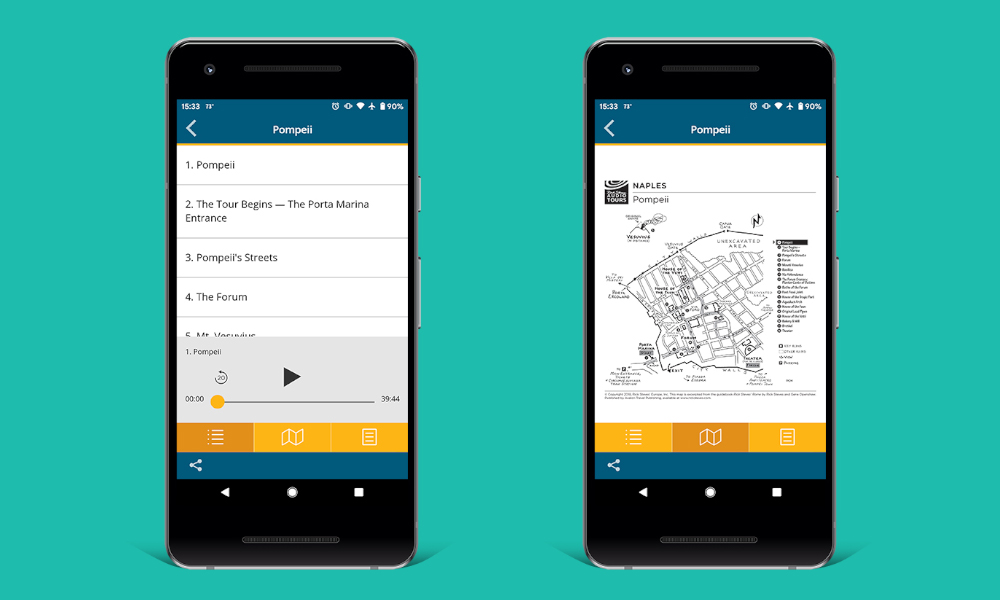 It’s an entertaining guide that lasts around 40 minutes. You can find the points of interest and then hit play. It does not run continuously so you can venture off on your own between sights. The app is easy to navigate and there are clear instructions on how to get from sight to sight. There’s some humor as well! 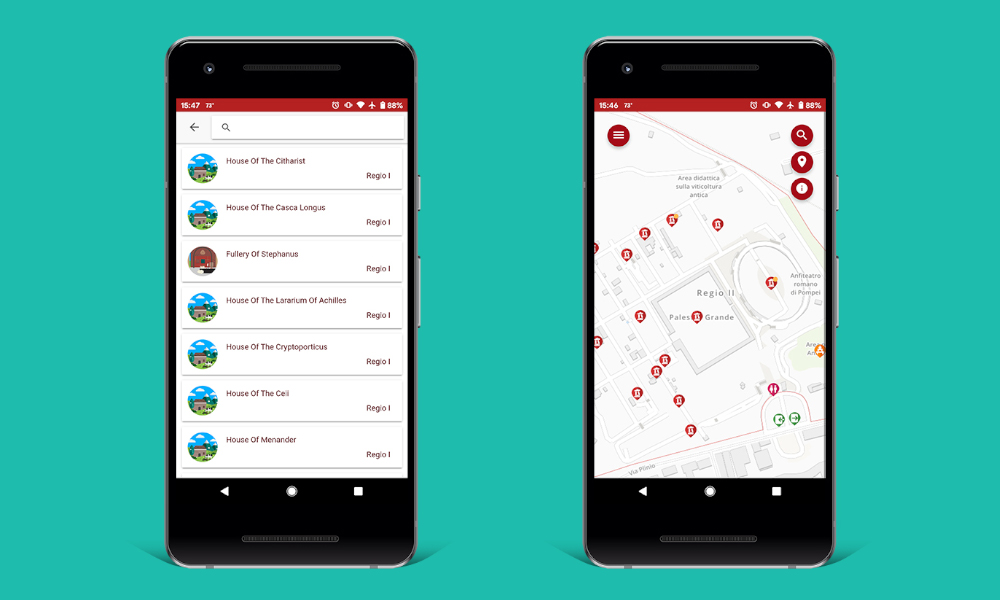 This app, which works offline, includes an interactive map that lists about 94 different attractions inside Pompeii as well as where the nearest bathroom and other facilities are. You can use the map for free to see what you’re near.

For $5 you get the audio commentary to each of the 94 attractions in Pompeii. However, the audio sample we heard was not as engaging as Rick’s but it’s probably just as good as the audioguides offered by the park. The app claims to have more info on more sights than the park’s audioguides.


Things in Pompeii You Shouldn’t Miss!

House of the Faun 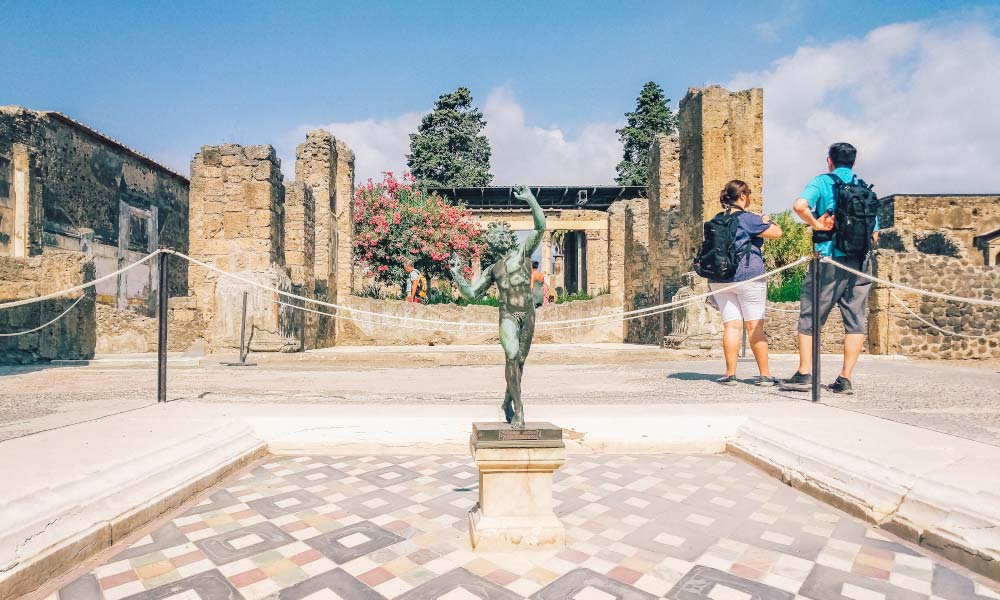 You’ll find some amazing mosaics here, which the eruption of Vesuvius actually helped preserve throughout the years.

There’s also the Dancing Faun, which the house is named after, made of bronze. We can’t believe this statue was in such a good state! Turns out, the original is in the archaeological museum in Naples and this is just a replica. However, it helps paint a picture of what this house was like before 79 AD. 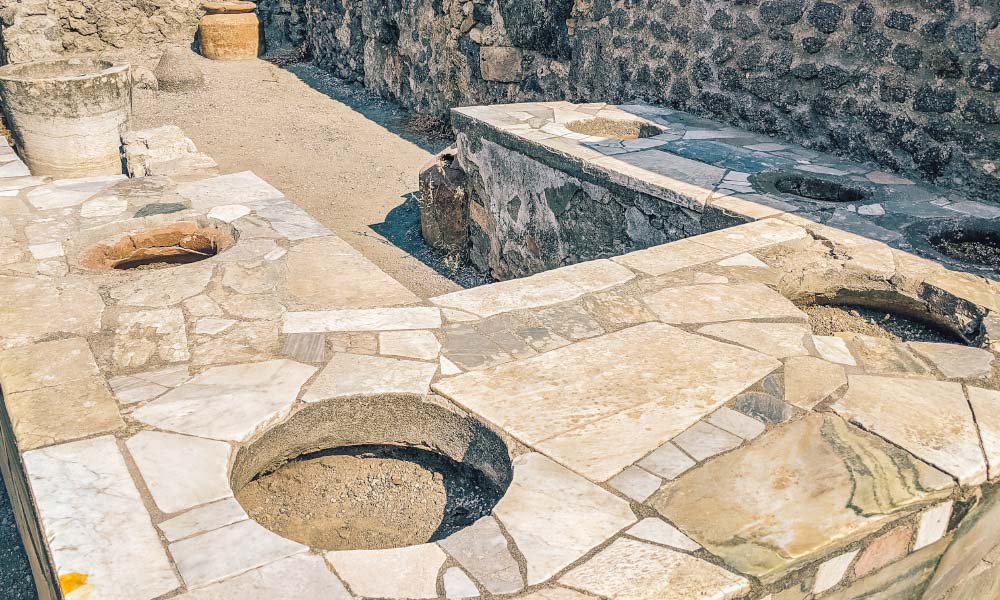 You’ll find these little “fast food” joints scattered about town and can spot them by their huge holes in stone counters. These holes used to hold pots of food that were being kept warm for consumers. Be sure to pay attention to the doorways, if you look carefully you can see the former tracks for the sliding doors and the holes for the awning.

This is a somber but very important part of this archaeological find. Empty spaces in the ground were discovered and they were in the shape of bodies. They poured plaster to form casts of these bodies, both humans and animals, and you can see what they looked like in their last moments. Rick Steves’ app takes you there and explains so don’t miss it! 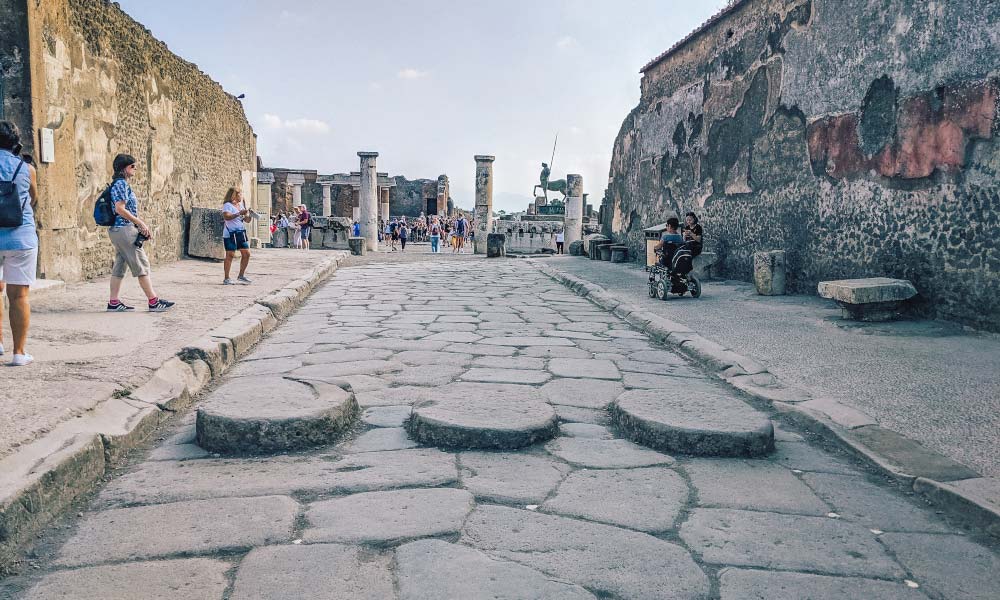 These stepping stones were the Roman crosswalk. Most evenings the street was flooded to clean away the muck and these stones helped people cross the street. They also made pedestrians aware of traffic, whether it was a one or two way street.

House of the Vetti

The most well-preserved home in Pompeii, the House of the Vetti is a must! Unfortunately for us, it wasn’t open during our visit. Needless to say we were disappointed because we could see some amazing frescoes from the doorway. Hopefully it’s open during your visit!

Get a View of Vesuvius 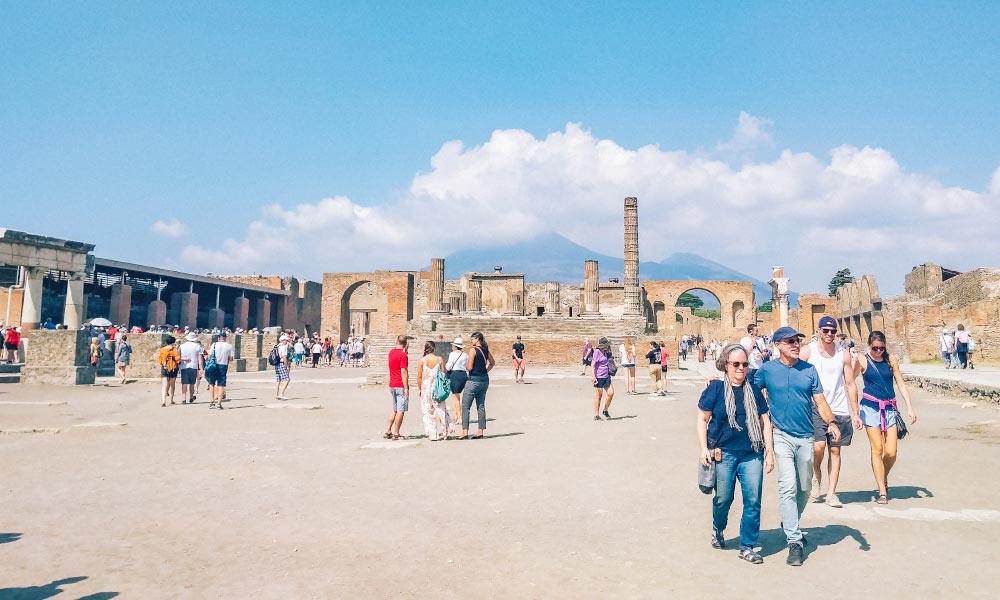 The whole reason Pompeii is here for us to appreciate today is because Vesuvius erupted in 79 AD. It covered the city in ash, protecting it from future plunders by barbarians and other looters. Be sure to grab a picture of this volcano in the distance and take a moment to understand how big that eruption was!

This is probably the one sight that everyone sees so you don’t need us to tell you. However, we’d like to warn you about the line! There will be huge groups, couples, solo travelers, and everyone else in between standing in line and there’s no order to it. It’s pretty much just functioning chaos.

Hop in line and follow the crowds. Be prepared to look quickly while inside because it doesn’t last long! The “menu” on the wall is definitely a good picture to take back home but try to take note of the rooms as well. You can’t take all day inside because of all the people getting in behind you. Even though it’s a short visit inside it’s worth the wait!


Summary of Pompeii on a Budget 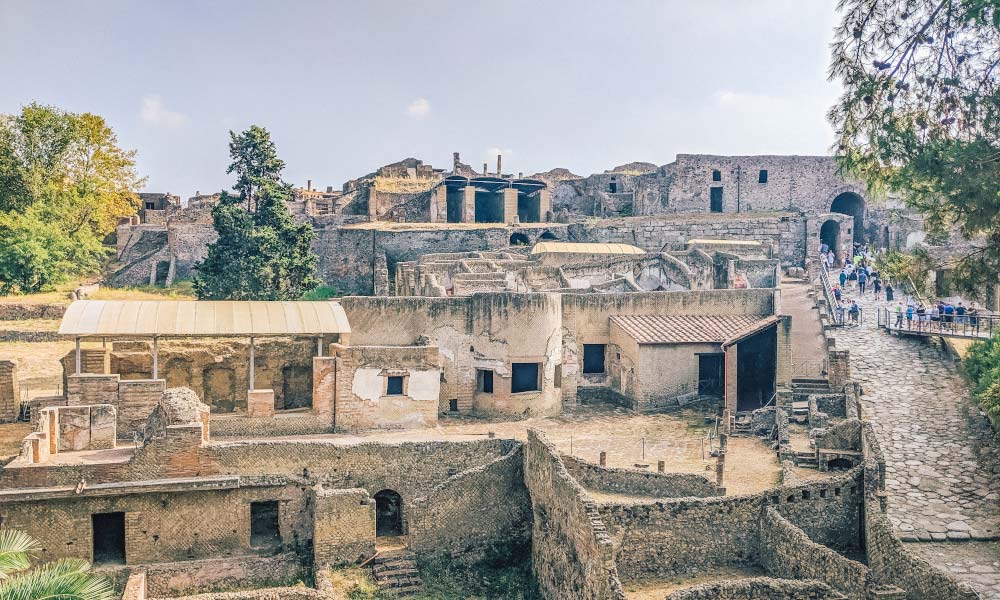 You don’t have to empty your wallet to see this historic city and can have a lot of fun on your own. Pompeii is very doable on a budget and we think that extra money in your pocket could be better spent in Naples proper. Neapolitan pizza, anyone? 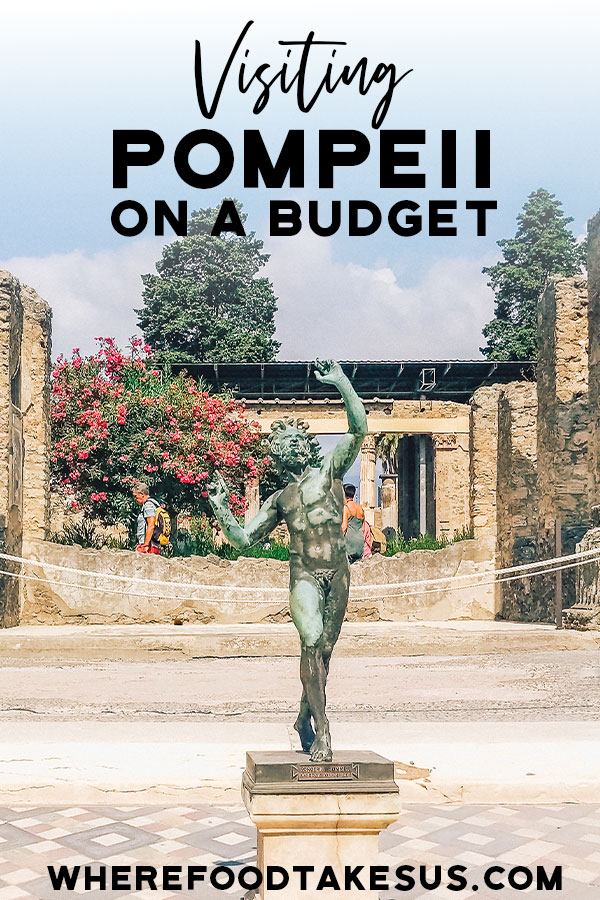 Instagram Pinterest Mix
PrevPrevious1 Day in Siena: What to See, Do and Eat!
NextSee Nice, France in 2 Days on a Budget!Next 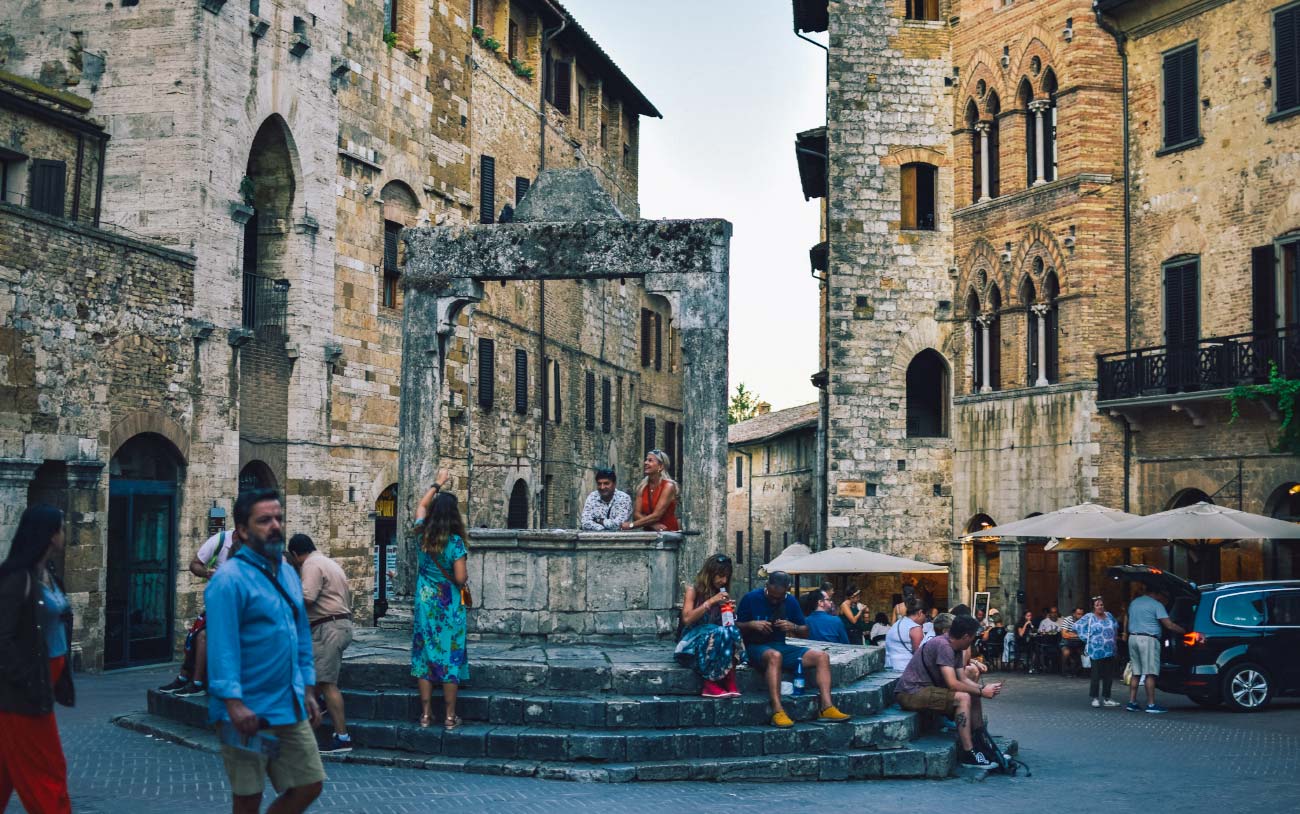 Italy is one of the most traveled to countries on the planet and deservingly so! It’s one of our favorites…
Read More

Naples is one of the most underrated cities in Italy and many itineraries fail to include it on their list.…
Read More 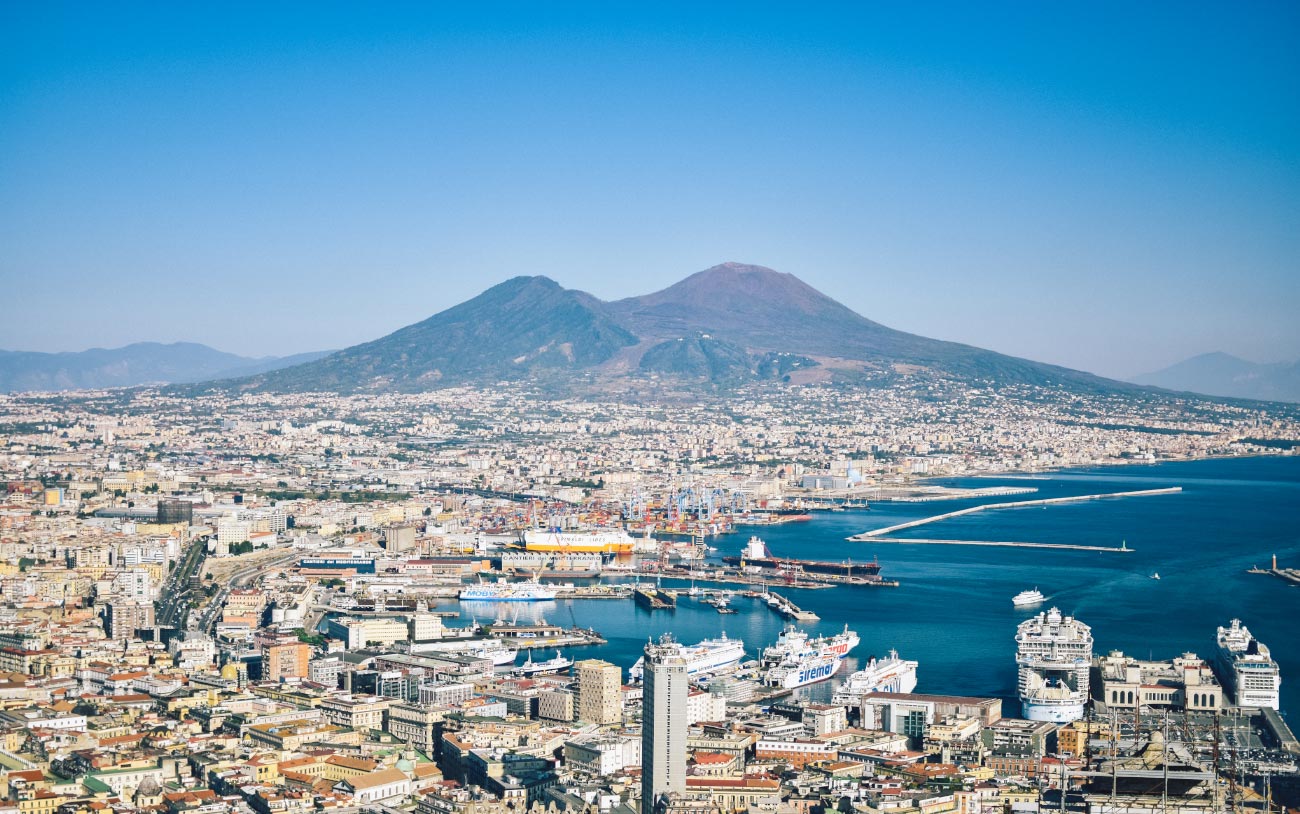 The Complete Guide to Visiting Naples, Italy on a Budget

Naples is a must for any traveler looking for an authentic experience in Italy. This is where the pizza was…
Read More